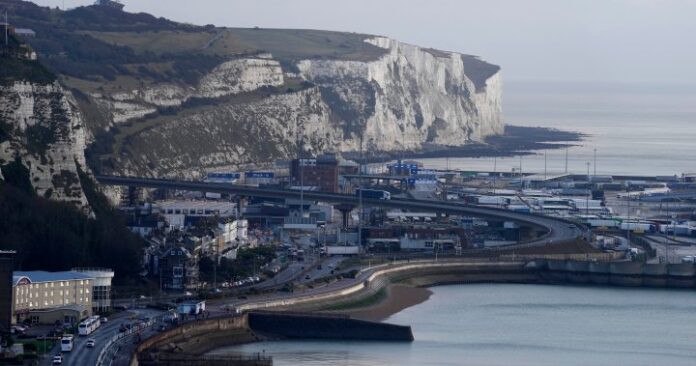 Children and pregnant women were among at least 27 migrants who died when their small boat sank in an attempted crossing of the English Channel, a French government official said Thursday.

Interior Minister Gerald Darmanin also announced the arrest of a fifth suspected smuggler thought to have been involved in what was the deadliest migration tragedy to date on the dangerous sea lane.

In their immediate response to the sinking, French authorities initially gave slightly differing figures on the numbers of dead, from at least 27 to 31. The figure that Darmanin used Thursday morning on RTL radio was 27.

Darmanin said authorities are working to determine the nationalities of victims from the sinking on Wednesday. Two survivors were treated for hypothermia. One is Iraqi, the other Somali, Darmanin said.

“Pregnant women, children died,” he said, without detailing their numbers.

The fifth suspect was driving a vehicle registered in Germany, Darmanin said. He said criminal groups in Belgium, the Netherlands, Germany and Britain are behind people-smuggling networks. He called on those countries to cooperate better in the battle against smugglers, saying they don’t always respond fully to French judicial requests for information.

“Britain and France must work together. We must no longer be, in effect, the only ones able to fight the smugglers,” the minister said.

“The smugglers buy boats, Zodiacs, in Germany with cash,” he added. “The smuggler arrested overnight has German plates; he bought his Zodiacs in Germany.”

Read more:
What’s behind the migrant crisis at the Belarus-Poland border, and what happens next?

The minister also took a swipe at British government migration policies, saying France expels more people living in the country without legal permission than the U.K. Illegal migration from France’s northern shores to Britain has long been a source of tension between the two countries, with both sides blaming each other even as their police forces work together to try to stop unseaworthy boats from crossing the English Channel. The issue is often used by politicians on both sides pushing an anti-migration agenda.

He also suggested that by hiring people living in the country illegally, British employers are encouraging illegal migration to English shores.

“English employers use this labor to make the things that the English manufacture and consume,” he said. “We say reform your labor market. Tell English employers that we need them to be as patriotic as the conservative government.”

1:49
Thousands of migrants stranded at Belarus-Poland border in freezing temperatures

Ever-increasing numbers of people fleeing conflict or poverty in Afghanistan, Sudan, Iraq, Eritrea or elsewhere are risking the perilous journey in small, unseaworthy craft from France, hoping to win asylum or find better opportunities in Britain. The crossings have tripled this year compared to 2020.

British Prime Minister Boris Johnson and French President Emmanuel Macron spoke after Wednesday’s tragedy and agreed “that it is vital to keep all options on the table to stop these lethal crossings and break the business model of the criminal gangs behind them,” Johnson’s office said.

Macron advocated an immediate funding boost for the European Union’s border agency, Frontex, and an emergency meeting of European government ministers, according to his office.

“France will not allow the Channel to become a cemetery,” Macron said.

Bitcoin, Ethereum And Other Cryptos Plunge 15%+ In The Latest Risk-Off...