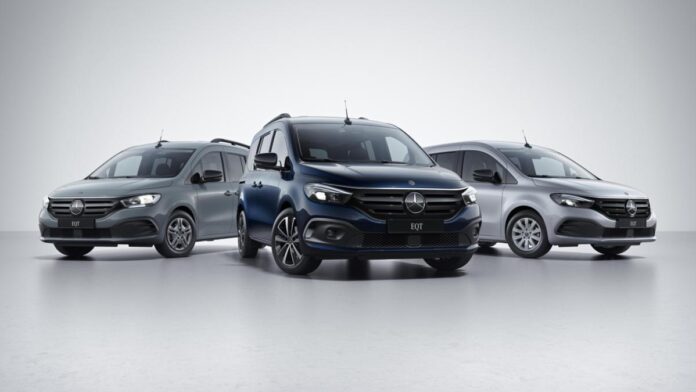 Mercedes-Benz has revealed the people-mover version of the eCitan van called the EQT in Germany, alongside a near-production Concept EQT Marco Polo camper van.

The Mercedes-Benz EQT is essentially an all-electric version of the T-Class people mover which shares its bones with the Renault Kangoo.

Renault even offers an electric version of the Kangoo called the Kangoo E-Tech Electric which is available in both people-mover and panel van configurations. The latter of these options is set to arrive in Australia in early 2023.

It’s unclear if the Mercedes-Benz EQT will be coming here though, as Mercedes-Benz Vans Australia has historically said it’s assessing the suitability of the related Citan, eCitan, and T-Class models. No official decision to launch these models have been made yet.

The previous-generation Mercedes-Benz Citan never launched in Australia because it wouldn’t have received a five-star ANCAP safety rating.

The Mercedes-Benz EQT is powered by a single electric motor producing 90kW of power and 245Nm of torque, sending drive to the front wheels only.

This is mated to a 45kWh lithium-ion battery pack. Mercedes-Benz claims the EQT has a range of 280km according to WLTP testing, with a combined consumption of 18.99kWh/100km.

The EQT comes with a Type 2/CCS combination charging plug and can be charged at a maximum of 80kW when plugged into a DC fast charger. Mercedes-Benz claims that charging at this speed from 10 to 80 per cent will take 38 minutes.

The electric people mover can also charge at up to 22kW when plugged in at an AC wallbox.

The Mercedes-Benz EQT will initially be available in short-wheelbase form with five seats, with a long-wheelbase variant with seven seats set to follow in 2023.

As noted above, Mercedes-Benz also revealed the near-production Concept EQT Marco Polo camper van which is based on the long-wheelbase EQT.

This concept camper van provides a glimpse at the production EQT Marco Polo which is still in development according to Mercedes-Benz.

Mercedes-Benz currently has a number of battery-electric van models, including the eVito, eVito Tourer, EQV, and eSprinter.

Both versions of the eVito and EQV are already on sale in Australia, with the updated eSprinter set to arrive in 2024 with a claimed range nudging 500km.

From 2025, all new Mercedes-Benz architectures will be electric as the brand plans to be fully EV by the end of the decade “wherever market conditions allow”.

That means there’s a new, dedicated EV architecture for the company’s vans. Called VAN.EA, it’ll be launched “from the mid-2020s”.