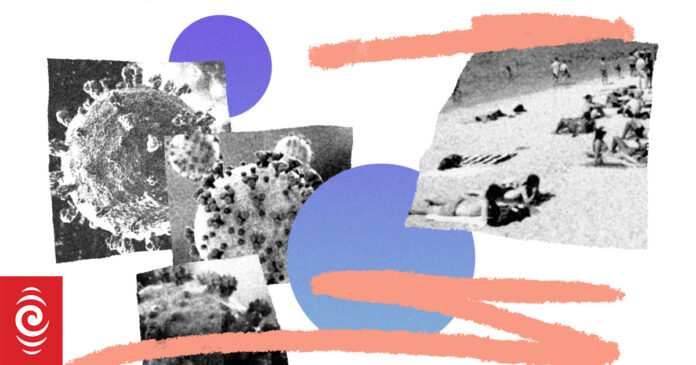 Covid-19 cases are on the rise, with 6000 reported yesterday – a jump of more than 1200 on the Tuesday prior, and the lead-up to Christmas will be a risky period for infections, one modeller says.

Te Pūnaha Matatini physicist and contagion modeller Dr Dion O’Neale told Morning Report it was not unusual to see higher numbers reported on Tuesdays as there tended to be a lag in testing over the weekend.

However, the latest numbers showed a wave of infections was in progress, he said.

“This is due to the number of new variants we’ve got knocking around at the moment.”

It was difficult to predict exactly how many cases were in the community as people were not reporting cases as much as they had during earlier waves, he said.

This could be determined by looking at wastewater samples, which helped to give an “independent estimate” of the numbers of infections in the community, he said.

While there were some “tricky things” that had to be done to crunch the data gathered through wastewater sampling, it did give modellers some idea of how many of the cases in the community were actually turning into confirmed or reported cases.

“We’re probably only catching around maybe half as many of those infections as we were earlier in the year, or around the middle of the year.”

Looking at wastewater data and the number of reported infections together, a 6000-case day today likely represented double the real number of community cases a 6000-case day in the middle of the year had, he said.

“We still don’t know what that 6000 cases is at either of those points in time, in terms of the absolute number of infections behind them … that’s the thing we need an infection-prevalence survey for – but we know that we’re reporting less.”

Modelling to try and predict how long this wave might last was “confused a little bit” by the bump in case numbers that occurred between September and early November, as people relaxed some of their behaviours in response to the Covid-19 Protection Framework being removed, O’Neale said.

“That gave us a new batch of people who were recently infected and who now have some immunity from prior infection and that may have slowed down the rise we’re now seeing from these new variants coming in.”

It was possible that meant we would see a more spread-out peak between now and Christmas, rather than the “relatively sharp peak” that might otherwise have been expected, he said.

He suspected people would get “a little bit better at testing” as reported case numbers began to rise, which would help to paint a more accurate picture of the real numbers infected during this wave.

Christmas gatherings and social events over the next few weeks would bring increased opportunities for the virus to spread, but the summer holidays which followed could help to bring case numbers down, O’Neale said.

“Once we get past the Christmas party season, we move into a much lower-risk transmission environment.

“We’re not at school and people aren’t going to work and so those are two of those big contexts where people are mixing indoors and breathing in lots of air that’s been in other people’s lungs, which is terrible for transmission.”

Covid-19: Northland supplier decides to vaccinate anybody who desires it