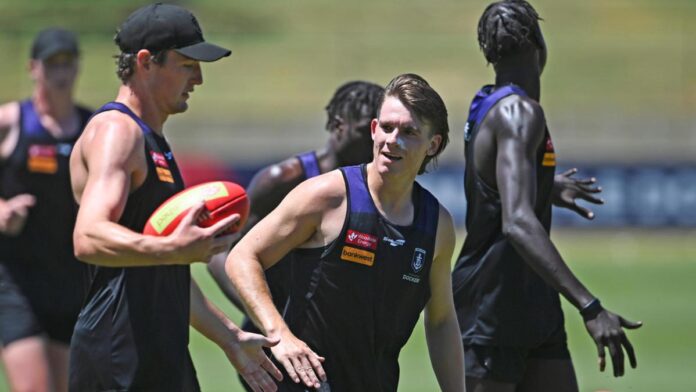 Second-year midfielder Neil Erasmus has made an early audition for Fremantle’s vacant wing rotation, taking out two of the Dockers’ four 1km time trials as first-to-fourth-year players returned on Monday.

The traditional 2km time trial was replaced with the quartet of shorter and sharper efforts, designed to test the players’ running intensity.

Erasmus took out the first two efforts, enhancing his bid for a round one berth after Blake Acres departed in the off-season.

The 18-year-old made his debut in round three and managed five games for the season, including one as an unused medical sub.

“He’s a very committed, dedicated young man and he made some great strides last year and fitness is definitely one of his strengths,” midfielder Caleb Serong said.

“I think he really wanted to hone that this off-season and he’s been working incredibly hard.

“To come out those first two and really put himself in a hole and work really hard is a credit to him and his mental toughness as well.”

Serong won the third and defender Heath Chapman took out the fourth and final trial but the trio were upstaged by Fremantle’s dietician Bryce Anderson.

Anderson set the pace despite finishing runner-up in the Fremantle half marathon on Sunday.

“I think he was in second gear. He’s a pretty incredible runner,” Serong said.

“Having him set the pace for us was nice but it was also pretty unattainable at times to try and stay with him.”

High-profile recruit Luke Jackson also suited up for his first official training session in purple, catching the eyes of onlookers with his athleticism.

The 21-year-old has already put in a mountain of off-season work since moving back home to Perth.

But Jackson finally got the opportunity to show it, running well in the time trials and launching himself at the footy in a contested marking drill.

“He’s been working really hard. He’s really committed and a great runner for a man of his size,” Serong said.

“He’s fit in with the group really well. He’s been buzzing around in the gym and running sessions the past few weeks.”

Despite not being due back for another week, injury-riddled pair Joel Hamling and Matt Taberner were also a welcome sight back on the training track.

Hamling, also 29, featured just once at AFL level but was a constant feature of Peel Thunder’s backline.

Others to return ahead of schedule included Will Brodie, Brennan Cox, Michael Walters and Lachie Schultz.

How will we know when it’s World War III?