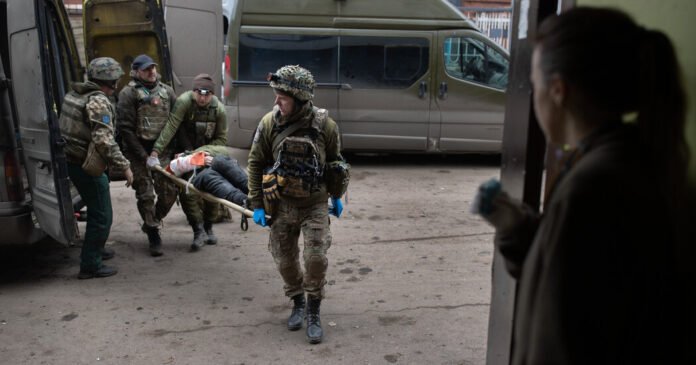 BAKHMUT, Ukraine — For almost an hour, the stream of Ukrainian casualties in the eastern city of Bakhmut seemed unending: Ambulances, an armored personnel carrier and private vehicles all screamed to a halt, one after another, and disgorged the wounded in front of the city’s only military hospital.

A soldier propped up by his comrades, his face a mass of mangled flesh, walked in the main gate. The dark green stretcher that awaited him was one of several still covered in blood.

By around noon on Friday, doctors had counted 50 wounded, many of them soldiers. The day before was even worse: 240 people had come through the hospital’s doors with everything from gunshot wounds to shrapnel injuries and concussions.

“They came in batches — 10, 10, five, 10,” said Parus, one of the Ukrainian medics at the hospital, as artillery screeched overhead and the chatter of machine-gun fire echoed off the surrounding buildings. “In the last couple of days the Russians have tried to advance more intensely.”

In the nine months since Russia invaded, Ukraine has celebrated major victories, breaking the siege of its capital, Kyiv, and pushing Russian forces out of the Kharkiv region and the port city of Kherson. But Bakhmut, in Ukraine’s Donbas region, has become a destructive vortex for both countries’ militaries. For months, they have thrown masses of troops and matériel into battle here as the Russians mount desperate attempts to capture the city and the Ukrainians to hold it.

The results have been near catastrophic. The city, once with a population of around 70,000, has slowly been chewed apart. And now, according to residents and Ukrainian soldiers, the bombardment in and around Bakhmut is at an intensity never before seen. Buildings that had been shelled before have been shelled again. The front line, on the city’s outskirts, looks like a muddy moonscape, or a scene from World War I. At night, residents can hear the grumble of Russian jets prowling the skies.

In recent days, Ukraine has sent floods of reinforcements into Bakhmut, including Special Forces and lesser trained territorial defense fighters, according to soldiers, local residents and a U.S. defense official.

The Russians have continued to throw formations from Wagner Group, an infamous paramilitary organization with direct ties to the Kremlin, at Ukrainian trenches. But they are now supported by a new tranche of Russian rank-and-file forces redeployed from the Kherson front, according to the U.S. defense official and Ukrainian soldiers.

The intensity of Russia’s attempts to seize the city has baffled military analysts. Elsewhere along their 600-mile front line, the Russians are mostly digging in for winter to entrench and conserve resources.

In summer, after Russian forces captured the neighboring province of Luhansk, seizing Bakhmut might have looked like a natural progression in Russia’s campaign to conquer the east — a step toward two more important cities, Sloviansk and Kramatorsk. But now, analysts said, given the degradation of Russian forces and their ammunition shortages after a series of setbacks, that goal seems improbable, especially after the loss of their foothold in the northeast.

“The Russian military is still dealing with unrealistic political demands to show progress,” said Michael Kofman, the director of Russian studies at C.N.A., a research institute in Arlington, Va. “But given poor quality of available forces and decreasing stocks of artillery ammunition, they are unlikely to be successful, because once again the Russian military appears to be feeding units piecemeal without adequate support.”

In recent weeks, Moscow’s need for any type of military victory has made itself felt in pockets elsewhere along the front line. Small villages near the Russian-controlled city of Donetsk have turned into flash points. But as the temperature plummets, Bakhmut has quickly evolved into Moscow’s main effort, where masses of their forces — including recently mobilized troops, according to Ukrainian soldiers — are trying to strangle the city from the east and south.

Russia’s strategy in Bakhmut is reminiscent of its seizure of the eastern cities of Sievierodonetsk and Lysychansk in June. There, Russian troops relied on superior artillery fire to overpower Ukrainian forces and gain ground. But the Ukrainian forces they faced then were short of both shells and Western-supplied artillery — something that is no longer as pressing, especially in Bakhmut.

“In the six months that I’ve been in Bakhmut, I have never seen our artillery working like this,” said a Ukrainian soldier in the city, referring to the volume of Ukrainian shells fired. He spoke on the condition of anonymity because he was not authorized to speak to the media.

One of the Pentagon’s frequent concerns is that the Ukrainians are firing ammunition at an unsustainable rate — especially in places like Bakhmut — under the false assumption that the West’s supply of ordnance is unlimited, said the U.S. defense official, who spoke on the condition of anonymity to discuss sensitive information.

As Bakhmut — shelled continually by the Russians since July — devolves into a battle of attrition, its strategic significance has changed, too. Even if Russia’s hopes of expanding its territory here have dwindled, it can still make the city a resource-intensive black hole for Kyiv, taking troops from other Ukrainian priorities, potentially including future offensives.

“Battles like Bakhmut consume forces that could be used elsewhere,” Mr. Kofman said, adding that Russian forces are using people they deem “expendable,” but even so, they cannot afford to waste that much artillery.

The Ukrainian forces holding Bakhmut are from a hodgepodge of units, including the 93rd Mechanized Brigade and the 58th Motorized Infantry Brigade, crack units that have been worn down by nonstop Russian assaults.

Troops from other brigades have arrived in recent weeks to plug holes in the lines and shore up formations floundering after heavy casualties. But even though the numbers of Ukrainian wounded and dead are steep, the attacking Russians are suffering far worse, Ukrainian soldiers say, as their exposed assaults are cut down by artillery and machine-gun fire.

U.S. defense officials estimate that Russia and Ukraine have each suffered around 100,000 wounded and dead over the course of the war, though those numbers are impossible to verify, the casualty numbers in Bakhmut even more so.

Colder temperatures and muddy trenches are also causing injuries on both sides. Pro-Russian military bloggers have complained about a lack of cold-weather clothing, especially among recently mobilized forces. And doctors at the Bakhmut hospital said hypothermia and trench foot, a painful skin condition caused by prolonged immersion in cold water, were common among Ukrainian forces, though treated quickly and often at the front line.

“The soldiers are getting everything they need — thermal underwear, winter coats, everything. But it does not fix everything,” said Ihor, a doctor at the hospital, who like others gave only his first name for security reasons. “Under the rain for two, three days, in the trenches — you understand.”

On Friday, Ukrainian soldiers who had recently come off the line huddled in front of the hospital, their faces, uniforms and weapons covered in splotchy mud, their trousers soaked from the recent rain. Medics from the 58th Brigade flinched as an incoming artillery round struck nearby but barely reacted as a second shell came so close that it cracked and shattered nearby windows: They were intent on moving their patient.

Much of the city’s eastern reaches — around a once acclaimed winery — is a gray zone between Russian and Ukrainian positions. To its south, the village of Optyne is heavily contested.

The mobilized Russian troops “are just taking a rifle and walking right down like in Soviet times,” said another Ukrainian medic going by the call sign Smile. “He gets killed and the next one comes up the same way.”

Recent battlefield advances around Bakhmut have been measured in yards, not miles. Every day is a kaleidoscope of Russian and Ukrainian forces either pushing forward or retreating, often resulting in minimal gains at a bloody cost.

On Friday, one Ukrainian soldier said, his unit was retreating when he was blown off his feet by a mortar, while another unit elsewhere in Bakhmut was assaulting a Russian position.

Ayrat, a soldier from the 71st Brigade, was pushing toward a Russian trench when he was wounded in both legs by a grenade, either dropped by a drone or fired by a Russian grenade launcher.

“We went for an assault,” he said, speaking hoarsely in a dimly lit hospital hall and wrapped in a foil survival blanket. His unit had approached where Russians “were entrenched.”

“My comrades are alive,” he said, wincing through the pain. “Do you have a cigarette?”