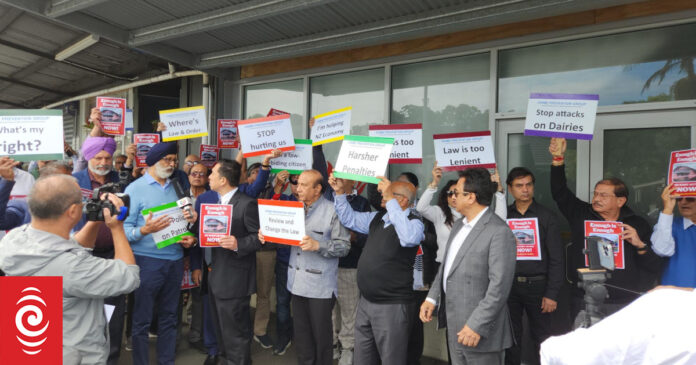 The father of a slain dairy worker was among hundreds who gathered in Auckland to protest against violent crime today.

Dairy owners closed up shop in Auckland, Wellington, and Chirstchurch to gather together and call for harsher punishments for offenders.

Last week, Janak Patel, 34, was fatally stabbed outside the Rose Cottage dairy in Sandringham, after confronting someone who had allegedly robbed the store.

Today, the chanting crowd called for justice and a change in the laws.

Kalidas said he wanted the harshest punishment for those responsible, and he did not want another person to lose their life.

Emotions boiled over and some protesters took to the street, blocking the road.

Some said offenders in New Zealand needed to fear police as they did in other countries.

Nearby in Sandringham, where business owners shut up shop and gathered together, restaurant owner Waseem Mohammed said the fatal stabbing was still a shock.

Many of them had personal accounts of robberies and ramraids.

Some store-owners said they had to pay for many safety measures out of their own pockets and did not feel police had taken their smaller crime reports seriously.

Urmila Bhana, who runs the Newtown Green Grocer, shared the messages of anguish heard around the country.

“Throughout the years that we’ve been in business, we’ve seen this happen too often, and the frequency is going up,” she said.

Bhana was worried for all the independent store owners near her.

Speaking for Kalidas at the Auckland protest, Charlene Peters said now was the time for action.

“We don’t want anymore Janak Patels to go before the government starts to act,” Peters said.

There needed to be accountability for the tax-payer dollars which went towards increased policing and ramraid recovery, she said.

Today, the government announced more funding for fog cannons as well as a range of other measures to support small businesses against crime.

There has been a slow rollout of the crime prevention fund, which was launched to protect small retailers from ram-raids after a spate occurred earlier this year.

But Police Minister Chris Hipkins told Checkpoint it could be a while before there was broad access to fog cannons because contractors were facing challenges in securing supply due to an international shortage.

“We’re basically now removing constraints at the government end, so it’s now a matter of the contractors getting as many of them into the country as they can and working with those businesses who want them, to get them installed.”

Between 600 to 700 fog cannons have been ordered and are expected to be in the country by the end of the year, with expectations for them to be installed early next year.

“Ultimately, it’s going to depend on how quickly the contractors can get in supplies and that’s not something the government is going to be able to control. So the subsidy will be available as soon as one of those small businesses has found a contractor to do the work and who can access the supply.

He estimated about 200 to 250 small retail victims of aggravated robberies could be eligible to access the fund.

Fog cannons could make a difference in aggravated robberies, which is why the funding had been scaled up, he said.

“We’ve actually seen the number of aggravated robberies, since we did the first 1000 fog cannons, declining, but we have seen an increase again this year and as a result we’re always looking at what more we can do to provide support.”

Concern dairy owners will take matters into own hands: ‘A repeated trauma’

“This is a repeated trauma that they face day in and day out and they want solutions, they want answers.”

Today’s announcement was a “good band-aid” but would not solve the problem, Chittibomma said.

He wanted to see tougher laws for youth offending and a closer look at 501 deportees in the community as well as people on bail, and beneficiary families who have a child involved in offending.

“We need to ask serious questions to these parents as to why these youth are out offending.

“I don’t think they deserve taxpayers’ money if they can’t take care of their children and they want to go out and offend.”

He clarified he did not take issue necessarily with the maximum jail time for burglary and aggravated robbery – 10 years and 14 years respectively.

“[But] I have a feeling that they are not in jail for that long,” he said, adding he was concerned bail may be given too soon to offenders.

He feared dairy owners might take the law into their own hands by arming themselves with items like hockey sticks for self-defence.

“They say they’ll end up doing something and they’re crying out for help so if we don’t act and if we don’t think outside the box and if we don’t get some real solutions on the ground, probably you will see a dairy owner behind bars very soon.”

He said he tried to reason with the business owners today, but the matter had gone past that point.

Police Minister Chris Hipkins warned them that they could put themselves and others at risk and urged people to call the police instead.