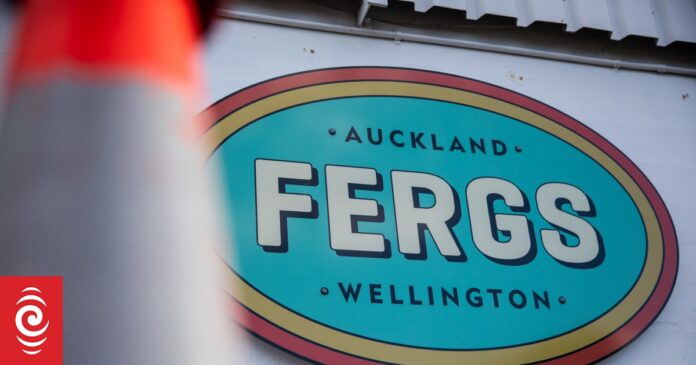 Climbers have raised concerns that the Fergs gym in Wellington is unsafe.
Photo: RNZ / Samuel Rillstone

It’s only a matter of time until someone is seriously hurt at popular Wellington climbing gym Fergs, according to some regular climbers.

Climbers have raised concerns that the facility is unsafe, and WorkSafe has since inspected and told the company to do better.

Those spoken to by RNZ – whose names have been changed – described a walkway directly under bouldering routes, a sharp wooden step where people can fall and hit their head, and fall zones which are too small and lack proper padding.

They raised these issues many times, but Fergs staff did not seem bothered, they said.

One climber, Shaun, described a near miss just a few weeks ago.

“This guy was sitting, and he was talking with his friend on the floor, and I tapped him on the shoulder and said ‘be careful, this guy is climbing above your head’.

“He moved away and honestly, fifteen seconds later the climber fell exactly where he was sitting.”

Another, Harry, said he would not renew his membership because it was too dangerous.

“It surprises me that the staff don’t seem to care about it, and also that no-one’s been seriously hurt yet.

“You know, you imagine someone three metres up in the air and they fall on someone straight down, it’s not gonna be good.”

“Where the heck is the regulatory body in here?

“Because you shouldn’t be able to get away with what they’re doing, you know, someone should be actually coming and checking this.”

Indoor climbing is not specifically regulated in Aotearoa – there are industry best practice guidelines, which both Fergs and WorkSafe helped create.

But WorkSafe did assess the facility in August after a climber got in touch.

In a statement, WorkSafe said:

“Please note this was an assessment, not a formal investigation, and was not triggered by a notifiable incident or injury.

The inspectors observed the following issues:

WorkSafe issued a directive letter for Fergs to address the issues under the Health and Safety at Work Act 2015, which requires businesses to eliminate risks so far as is reasonably practicable.

Fergs has accepted that all of the identified risks require additional attention, and has already taken steps to address these risks in full or on an interim basis until more permanent safety measures are in place.”

WorkSafe said it does not intend to take further action, but may do so if the situation changes.

But climber Shaun said while some padding was since added, it was not enough, and two small bits of red tape on the floor were meant to warn people not to walk under the bouldering wall.

Some people now avoided the dangerous areas altogether, said another climber, Beth – but she worried for newer people who would not know what to look for.

“If you are going to the gym for the first time, or you just started climbing maybe, you wouldn’t be able to read where you can fall.

“That could be very dangerous.”

Fergs owner Simon Hughes declined to speak with RNZ, but in an email he said Fergs welcomes scrutiny from WorkSafe “as any guidance keeps FERGS looking at risk with a fresh perspective.”

Hughes emphasised that the WorkSafe assessment was not on the basis of an incident or injury.

“…We at FERGS treat safety with utmost priority,” Hughes said.

“…The nature of these activities mean risk can not be eliminated however we do our best to mitigate risk as much as we can whilst maintaining the enjoyment the customers are looking for.

“We have met all the requirements outlined by WorkSafe which in this case only relates to the bouldering area, additionally we have also taken a more defensive view around route setting in the highlighted areas.”

Hughes did not answer RNZ’s questions about how the issues had been addressed, how the changes would keep climbers safe, why nothing was done when climbers raised safety concerns with staff, whether Fergs follows the industry guidelines, and what reassurance it could give climbers that they were safe.