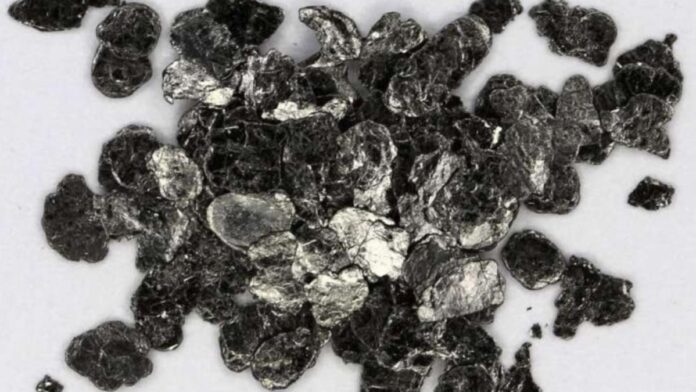 Castle Minerals has tabled a JORC-compliant exploration target at its Kambale graphite project in Ghana from 16.82Mt to 50.46Mt with grades ranging between 6.74 and 10.4 per cent total graphitic carbon.

The ASX-listed gold and battery metals explorer says the independently prepared estimate pulled together historical geophysical data and drilling datasets to define the target to a vertical depth of 100 metres.

The recently reported results of a 52-hole reverse circulation, or “RC” drilling program has pushed the boundaries of high-grading mineralisation, that remains open along strike and at depth, to a length of 2.5km north to south and 500m east to west.

Exploration in the Kambale area dates back to the 1960s with Russian geologists identifying graphite during their regional hunt for manganese.

Graphite is one of the key ingredients of a lithium-ion battery due to its properties of being an excellent conductor of heat and electricity.

Benchmark Mineral Intelligence recently reported that demand for graphite from the battery anode segment could increase by seven times in the next decade as electric car sales surge and the upswing in energy storage continues.

With the improving graphite market metrics, Castle dusted off the dataset late last year at the mothballed Kambale graphite project that had sat idle in its portfolio since 2012.

As the company continues to evaluate the project’s ability to produce a fine flake graphite concentrate, Castle has commenced a four-hole diamond drilling program to retrieve samples for the second phase of test work.

After the diamond drilling is complete the explorer will wheel in a drill rig for a 31-hole, 2500m RC drilling program to better define the higher-grade graphitic zones ahead of a maiden mineral resource estimate slated for release in the first quarter of next year.

The independently estimated Exploration Target of 16.82 to 50.46 million tonnes at a grade range between 6.74 per cent and 10.40 per cent TGC indicates the Kambale Graphite project has a possible scale and grade to warrant progression to the next phase of assessment.

As is the case in nearly all metals attached to emerging electric vehicle markets, a looming supply deficit is putting a new shine on graphite. With the rods turning and more drilling scheduled on the calendar – Castle will be looking to add more tonnes to its mineral resource estimate – and soon.