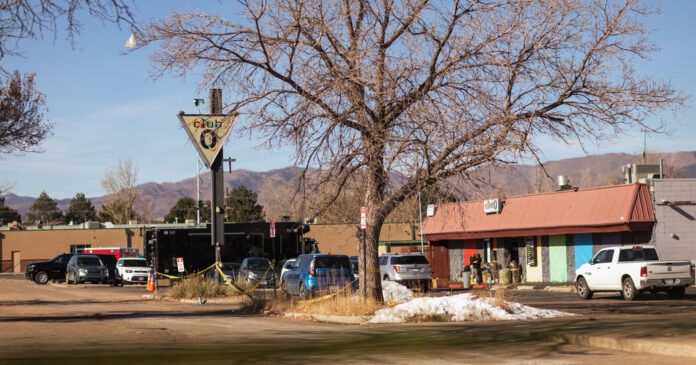 Thomas James was trained in the military on how to act in a crisis. And he responded immediately when an assailant entered Club Q in Colorado Springs on Nov. 19 shrouded in body armor and began shooting with an AR-15-style rifle, the police said.

Mr. James, a petty officer second class in the Navy, helped Richard M. Fierro, an Army veteran and another patron at the L.G.B.T.Q. club, subdue the attacker, preventing further bloodshed in a massacre that left five dead and 18 injured, the authorities said last week. Chief Adrian Vasquez of the Colorado Springs Police Department said that both knocked down the assailant.

On Sunday, in his first public comments on his role that night, Mr. James said in a statement that “I simply wanted to save the family I found.”

Mr. James issued the statement through Centura Penrose Hospital, where he was recovering from an undisclosed injury from the attack. The hospital said he was in stable condition.

Mr. Fierro said the chaos during the rampage made the takedown of the assailant a blur, but he remembers clearly how Mr. James, whom he had never met, tumbled to the ground with him as he took down the attacker, pushed one of the shooter’s guns away, then, at the urging of Mr. Fierro, repeatedly kicked the assailant in the face.

“That was hard to do, it’s not a humane act,” Mr. Fierro said in an interview. “But I asked him to help me, and he helped me.”

The suspect in the attack, Anderson Lee Aldrich, 22, is being held on suspicion of first-degree murder and hate crimes and is expected to be to be formally charged at a hearing on Dec. 6.

“If I had my way, I would shield everyone I could from the nonsensical acts of hate in the world,” Mr. James said.

“Thankfully, we are family, and family looks after one another. We came a long way from Stonewall. Bullies aren’t invincible,” Mr. James said, referring to the uprising at a New York bar in 1969 that galvanized a national movement for gay rights.

In his statement, Mr. James told young people to “be brave.”

“Your family is out there,” he said. “You are loved and valued. So when you come out of the closet, come out swinging.”

According to Navy records, Mr. James is an information systems technician who enlisted in 2011. He served on the Bonhomme Richard, the ship that was destroyed in a fire in 2020, and at bases in England and the Naval Air Station Lemoore in California. In 2021, he was stationed in Colorado Springs with the Defense Intelligence Agency, which provides military intelligence to the Defense Department.

A friend, David Whelan, 48, of Beckley, W. Va., said Mr. James grew up in the state and that the two of them became close years ago when Mr. James would visit his game and comic book store as a teenager. The two stayed in touch over the years, and when Mr. Whelan saw the news about his friend’s actions at Club Q, he wasn’t surprised.

“It didn’t matter where it would be,” Mr. Whelan said. “If Thomas was somewhere and gunfire lit out, quiet Thomas would be the one who would jump up and run to protect people. Because if you just know him, you know that he doesn’t want to see people hurt.”

In a Future Filled With Electric Cars, AM Radio May Be...