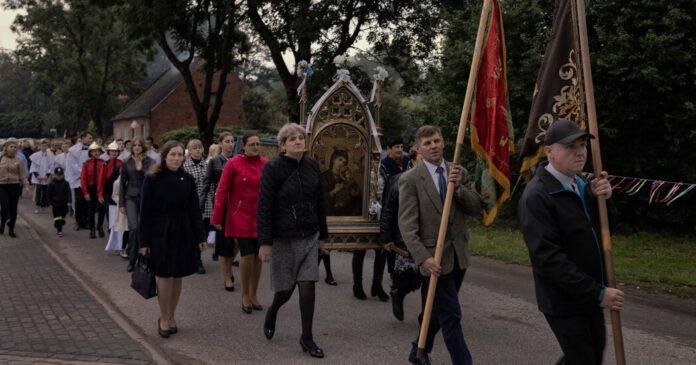 BYDGOSZCZ, Poland — A committed Catholic who served from childhood as an altar boy, Karol dreamed as a teenager of entering the seminary in his hometown in northern Poland and becoming a priest.

“I had a deep faith and wanted to serve the church,” said Karol, now 26, recalling how he had discussed his hopes of one day becoming a bishop with his spiritual mentor, a priest at the Church of Divine Providence in the city of Bydgoszcz.

But that was before the priest raped him.

“The whole church has been poisoned,” Karol said in an interview, asking that his full name not be used by The New York Times.

His story, one of many that has stirred outrage over the years in the Polish news media, is part of a cascade of sexual abuse scandals that has plunged the Roman Catholic church in Poland into a deep crisis and eroded trust among young people. Polish youth are also wary of what many of them see as the church’s symbiotic relationship with the country’s deeply conservative governing party, Law and Justice.

A report issued last November by C.B.O.S., a government-funded polling agency, found that only 23 percent of Poles under 25 regularly go to church, a third the level of three decades ago. The Catholic Information Agency reported that only 20 percent of young people now disapprove of sex before marriage. The primate of the Polish church, Archbishop Wojciech Polak, deplored what he called a “devastating” decline in religious practice among younger Poles.

This summer, the seminary in Bydgoszcz that Karol had planned to attend shut down, bereft of new students.

One of Poland’s biggest pop stars, Dawid Podsiadlo, 29, announced last month that, though still a believer, he was formally leaving the church. “I have a problem with the institution,” he said, because of “more and more cases of pedophilia and its meddling in political and ideological matters.”

Andrzej Kobylinski, a professor at Cardinal Stefan Wyszynski University in Warsaw and an outspoken critic of the church’s failure to grapple with sexual abuse, said in an interview that the “creeping secularization” of Poland had “turned into a gallop.” He added, “This is a time bomb that was always going to explode sooner or later.”

Compared with most other European countries, Poland is still a bastion of faith, with nearly 94 percent of the population identifying as Catholic, according to the Central Statistical Office.

The church, deeply implanted in society thanks to its more than 33,000 priests in 10,382 parishes, is also closely aligned with the Polish government. Dominated since 2015 by Law and Justice, the government has delivered changes dear to the church: a near total ban on abortion, a ban on Sunday shopping, the expanded use of a law banning “blasphemy” and a drive to root out what it denounces as “L.G.B.T. ideology.”

But for many young people, Poland’s Catholic Synod acknowledged in a recent report bemoaning “empty seats in the pews of parish churches,” the “church is just sad.”

The coronavirus pandemic, which began in 2020, has also caused many to break their churchgoing habits, as lockdowns at the start of it meant that large gatherings were prohibited.

In Bydgoszcz, the number of people celebrating Mass picked up slightly last year as fear of infection eased, but it was still only about 20 percent, down from 33.5 percent in 2019, the local bishop, Krzysztof Wlodarczyk, told Polish news media this month.

For Tomasz Terlikowski — a Catholic philosopher who headed a commission investigating the abuse of nuns and other women by a Dominican friar convicted of rape in September — the “biggest threat to the church now is indifference” as young people lose interest in an institution tainted by scandal and amid perceptions that it is allied with the political agenda of Law and Justice.

Walking by the now-closed Bydgoszcz seminary on a recent morning, Michal Malada, 23, said he used to celebrate Mass regularly with his grandmother but stopped because it “has become too political.” He added, “I haven’t lost my faith, but the church as an institution does not represent God as it should.”

The bishop of Bydgoszcz declined to comment for this article.

In the 1980s, the Catholic Church in Poland stood shoulder to shoulder with the Solidarity trade union movement in the struggle for freedom, respected as a unifying force that could rally opposition to the ruling Communist party.

But the church has become a highly divisive force in a country increasingly polarized between supporters and opponents of the governing party.

Renata Mazurowska, a former regular churchgoer who now campaigns for women’s rights in Bydgoszcz, recalled how in 1991 she celebrated a Mass by Pope John Paul II, who was born in Poland, and had looked up to the church as her guide.

“The pope was a moral certainty for me; we were all on the same side” against Communist rule, she said. She no longer goes to church and has encouraged her two daughters to stay away, too, because, she said, “the idea that they are meeting priests who are pedophiles is horrifying.”

“For me,” Ms. Mazurowska said, “the authority of the church has collapsed.”

Rural areas have largely avoided this collapse. Piaski Kruszwickie, a small village south of Bydgoszcz, was decked with pennants and pictures of the Virgin Mary recently when nearly all of its residents turned out to celebrate the arrival of a copy of a revered Polish icon, the Black Madonna of Czestochowa.

But even there, disillusionment with the church over its handling of predatory priests bubbled below the display of devotion. A 50-year-old believer who gave only her first name, Beata, joined the crowd welcoming the icon but said she “felt more distant from the church than in the past” because of the “outrageous behavior of some priests.”

A big factor in the Polish church’s failure to tackle sexual abuse, according to Professor Kobylinski, is the legacy of Communist rule, during which accusations of rape and molestation against priests were routinely dismissed as fabrications spread by secret police agents dedicated to atheism. To defend itself against the state, he added, the church developed a “culture of omertà,” or silence.

While abortion rights activists and other foes of the government turn their anger on the church, Law and Justice has tended to support the church no matter what.

When the head of Law and Justice, Jaroslaw Kaczynski, and other senior officials presided over the opening of a new canal in September, they were joined by Slawoj Leszek Glodz, a disgraced archbishop who in March 2021 was punished by the Vatican for negligence “in cases of sexual abuse committed by certain clergy against minors” and barred from preaching in his previous diocese.

Mr. Terlikowski, the head of the commission that investigated Dominican order abuse, said right-wing politicians often discounted evidence of wrongdoing by priests, viewing it as “just another attack on the church” by their political foes.

Some senior Catholics have spoken out against the rot in the church and pushed for action.

Responding to figures last year showing that the church had received complaints of abuse against 368 boys and girls during a two-year period ending in 2020, Archbishop Polak, the primate, pleaded for “forgiveness” from “those wronged and all those shocked by the evil in the church.”

Pope Francis has also intervened from time to time to punish egregiously negligent Polish priests like Archbishop Glodz, but has largely let local church leaders police their own underlings.

In the case of Karol, the former altar boy in Bydgoszcz, this meant that Pawel Kania, a priest who was detained in 2005 in the southwestern Polish city of Wroclaw for possession of child pornography and on suspicion of abusing minors, was not defrocked but moved to the northern Bydgoszcz diocese to supervise altar boys and teach students.

“They all knew they were hiding a pedophile, and that is the biggest tragedy,” said Janusz Mazur, a lawyer who has represented Karol.

He added: “It is incredible: This priest was a suspected sex criminal and they sent him to teach religion to teenagers. If they had just stopped him when they knew, others would not have been hurt.”

The priest’s move to Bydgoszcz quickly stirred complaints that he was behaving indecently with teenage students. Once again, the church merely moved him to another district.

Mr. Kania was arrested again in Wroclaw in 2012 and charged with abusing young boys. Found guilty in 2015, he was jailed for seven years, which at last brought his career as a priest to an end.

Before that, however, he had free rein over altar boys and others in his charge in Bydgoszcz.

Karol said he was first abused when he was about 14. He said he was raped multiple times but did not tell his parents or anyone else at the time because he “felt ashamed and did not realize what was happening.”

Church hierarchs acknowledged they had failed Karol only when a court in the city of Gdansk ruled in 2021 that the dioceses of Bydgoszcz and Wroclaw were guilty of negligence because “the bishops were aware of their priest’s pedophilia.” The court ordered the two dioceses to pay Karol damages of around $60,000.

The two bishops who presided over the attempted cover-up have not been punished. One died, and the other, placed under investigation by the Vatican, resigned last year.

Karol says he still believes in God but wants nothing to do with the Catholic Church.

“The whole institution should be abolished,” he said. “It is based on lies and hypocrisy. It is evil.”

At Least 7 Die in Glacier Collapse in Italy’s Dolomites