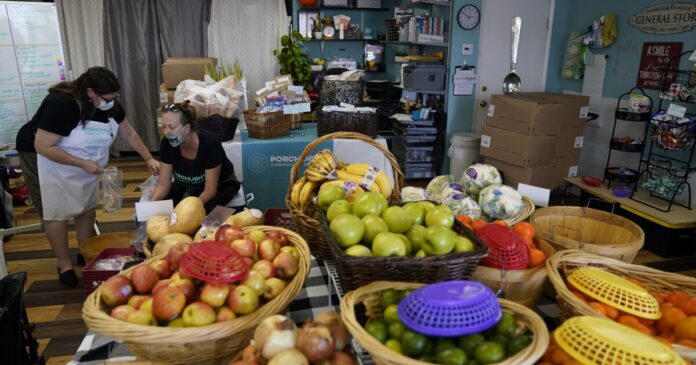 Everyone should have access to food. Yet it’s not considered a human right — like education or healthcare or drinking water — that is defended and guaranteed by governments. Why?

Maybe because, until recently, it was hard to imagine the technology, the industrial systems and the abundance to support universal food access. But it’s looking possible these days, and tentative experiments are moving the U.S. in that direction.

The idea of providing total access to food has been taking hold in different forms: As lines outside of food banks persisted and hunger skyrocketed during the pandemic, public schools temporarily offered free meals to all students. In the last two years, lawmakers have been debating bills that would make school lunch free for all, permanently.

States including California, Maine, Massachusetts, Nevada and Vermont and cities like New York have already secured funding for their own free meal programs, regardless of family income. Universal meals policies have also appeared in Minnesota, Maryland, New York, North Carolina and Wisconsin. In 2021, West Virginia policymakers proposed adding a “right to food” to the state’s constitution, while Maine’s House of Representatives overwhelmingly voted for a similar measure. The United Nations food systems summit in 2021 even promoted the idea of universal access globally.

One way to achieve universal access in the U.S. would be a new public food chain. Like the parallel systems of private and public schools or hospitals, it could be funded by the state or federal government and could coexist with the current marketplace. It could repurpose some of the subsidies that have been helping consolidated agribusiness for decades, ensuring that taxpayer money instead pays for food that would be made available outside the commodity system. This idea seems particularly urgent when the markets have been co-opted by corporations and billionaire landowners.

Universal food access would give hungry families another layer of support, without any shame. Universal food, crucially, would augment federal nutrition programs like food stamps, which cost the federal government more than $100 billion a year without reshaping the food industry for the better, while also stigmatizing beneficiaries.

That’s part of the appeal to Spanish chef José Andrés, who leads an organization to provide free meals after natural disasters. Universal access is an improvement over public assistance programs. “The system that is clear right now is, everybody is going to know you are in need. Anybody can be having a hard time,” Andrés told me. “Let’s create systems that don’t shame anybody.”

One way to do that would be to restructure some food companies, distribution warehouses and retailers as a public utility, like how the energy grid, sewers and water delivery are managed. If some processing plants, distribution warehouses and retailers were owned by government, they could use subsidies to buy grains, legumes like beans and meat directly from farmers, and the resulting goods could be made available free to everyone. Programs could alternatively take the form of universal school meals and open-to-all cafeterias that serve meals throughout the day.

I’m rooting for a different approach that strikes me as easier to implement, because it could operate within the existing food industry.

Errol Schweizer, formerly Whole Foods vice president of grocery, started researching the idea of a “public food sector” after the 2021 blackout in Texas when a winter snowstorm devastated the state’s power grid. Without heat and water in most places, 246 people died. In Austin, Schweizer and his family were without water for a week. He wondered: Why doesn’t the city have its own emergency response department that could operate as a publicly owned food distribution system to make sure residents are fed in times of crisis?

“I come at this from being a retailer,” Schweizer told me. “It still needs to be framed around meeting demand. Supply chains don’t come into existence naturally. They respond to the power of purchase orders.” An emergency system like he envisioned could be the beginning of reshaping the food supply chain, because government could become a major purchaser and could exert influence.

That’s how markets are built to work, not through subsidies such as those in the five-year, $400-billion farm bill that was enacted in 2018. Debate about its successor will begin in the months ahead, to be passed by the new Congress next year. That’s an opportunity to shift funding away from subsidies and toward market-based solutions.

With a public food sector, farmers would directly benefit, without giving part of their share away. Markets would also add another buyer, fixing how uncompetitive some meat markets in particular have become. A public food sector would also help to diffuse major consolidation among grocers, including the recently proposed merger of the top two corporations, Kroger and Albertsons.

Citizens themselves should also get into the food business. Taking an active role in your eating future can start as simply as working a shift at your local community-supported agriculture operation or food co-op. Collectively, we can nudge lawmakers to develop the infrastructure for regional food systems like canneries, commissary kitchens and other small-scale processing. This is good preparation for short-term interruptions as well as the protracted doom of climate change. Universal food access would give communities a foundation to withstand crisis in dignity.

As a consumer, I could drive myself crazy in all the details, second-guessing every food purchase and menu decision, but it’s not worth the stress. The industrial food system will thrive no matter what I buy. There’s a certain freedom in knowing just how meaningless voting with your dollar can be. What matters far more is how we take part in our own communities and how we direct our government.

Actions that create collective effects will be the foundation of a food system that’s more democratic, healthier and safer.

Chloe Sorvino, who leads coverage of food and agriculture at Forbes, is the author of the forthcoming book “Raw Deal: Hidden Corruption, Corporate Greed and the Fight for the Future of Meat,” from which this is adapted. @chloesorvino