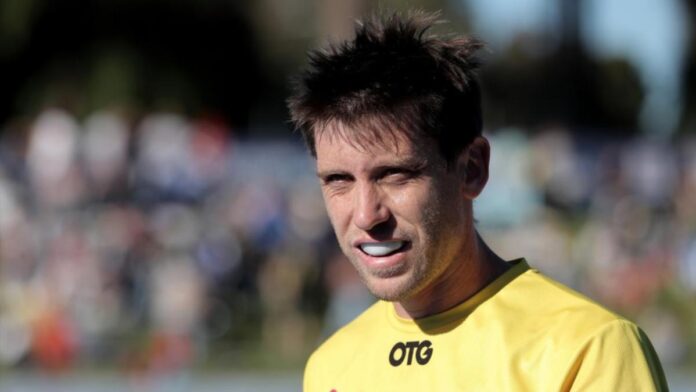 Ockenden became the first Australian to reach the remarkable milestone as he ran out with the Kookaburras in front of family, friends and former teammates for the 400th time in a career that began 16 years ago.

The 35-year-old is the seventh hockey player in history to play 400 internationals.

“To have the special occasion today was amazing. I can’t say thanks enough,” Ockenden said.

After prevailing 5-4 in the opening match of the series on Saturday, the Kookaburras win was built off the back of a hat-trick to Blake Govers, a double from Jack Welch and goals to Jacob Anderson and Jack Welch.

Govers’ hat-trick gives him five goals for the series and continues an astonishing goals-to-games ratio of 121 from 130 appearances.

India threatened to spoil the party early on when captain Harmanpreet Singh opened the scoring in the third minute.

The Kookaburras drew level in the 12th minute with Govers’ first and arguably best of his three goals.

The ball from the rebound off a Jeremy Hayward drag flick came to Govers in the circle and he expertly gave himself room on the reverse to hammer a fierce strike low into the backboard.

Welch scored his brace in the space of seven second-quarter minutes.

Hardik Singh pegged a goal back to make it 3-2 before Govers had his second three minutes before halftime to leave the Kookaburras with a two-goal advantage at the long break.

The only goal of the third quarter came from the stick of Mohammed Raheel.

However when Anderson and Whetton scored within the space of 90 seconds early in the last quarter to make it 6-3, and when Govers converted a penalty stroke to bring up his hat-trick, it became a matter of what the final margin would be.

The third game of the five-match series will be played in Adelaide on Wednesday.

Rafa set to fly to Melbourne, play in Aus Open