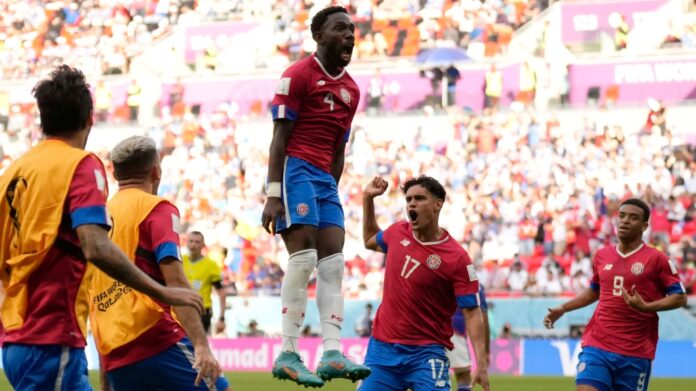 
Welcome to Day 8 coverage of the FIFA World Cup. This is your home for match reports, the latest injury and squad updates, as well as match start times.


It is arguably the biggest day in Canadian men’s soccer history as the team prepares to face Croatia. Be sure to read CTVNews.ca’s preview on all you need to know about the matchup.


In the final match of the day, Germany faces an uphill task to keep its World Cup dream alive against Spain, with the team fresh off a 7-0 victory over Costa Rica.


Earlier, Morocco earned a 2-0 win over Belgium after Costa Rica edged past Japan 1-0.


France became the first team to clinch a spot in the Round of 16, while both Poland and Australia staved off elimination against Saudi Arabia and Tunisia, respectively.


Canada must secure at least a draw against Croatia to keep alive its hopes of advancing from the group stage.


With Morocco having beaten Belgium, Canada’s need for a win and all three points becomes more urgent.


As if anyone needs any extra motivation at a World Cup, Croatia found some through John Herdman’s “We’re going to go and F Croatia” comment shortly after Canada lost to Belgium.


Canada captain Atiba Hutchinson will be making his 100th appearance for the men’s senior national team. There is one change to the starting lineup from the Belgium match with Cyle Larin replacing Junior Hoilett.


Morocco put in a magnificent performance to beat Belgium 2-0.


Substitute Abdelhamid Sabiri caught Belgian goalkeeper Thibaut Courtois off guard with a direct free kick from a difficult angle to give Morocco a 1-0 lead.


Another substitute, Zakaria Aboukhlal, wrapped up the win with a precise finish in the 92nd minute.


Morocco now heads into its final group match against Canada on Thursday knowing a draw will be enough to advance to the Round of 16.


Belgium can still advance with a win in its final match against Croatia, but a draw will make goal difference a factor.


Regular Moroccan goalkeeper Bono was a late scratch while Bayern Munich’s Noussair Mazraoui was fit to start after picking up an injury in Morocco’s opening match against Croatia.


An 81st-minute winner from Keysher Fuller gave Costa Rica a 1-0 win over Japan.


This is a massive missed opportunity for the Japanese after beating Germany in their opening match.


Costa Rica now have some semblance of hope after getting drubbed 7-0 by Spain. The North American side will play Germany in its final match on Thursday.


Match times are listed below. There is a three-hour preview of the Canada versus Croatia match beginning at 8 a.m. on TSN.


Day 9 concludes the second round of group phase matches and looks like this: