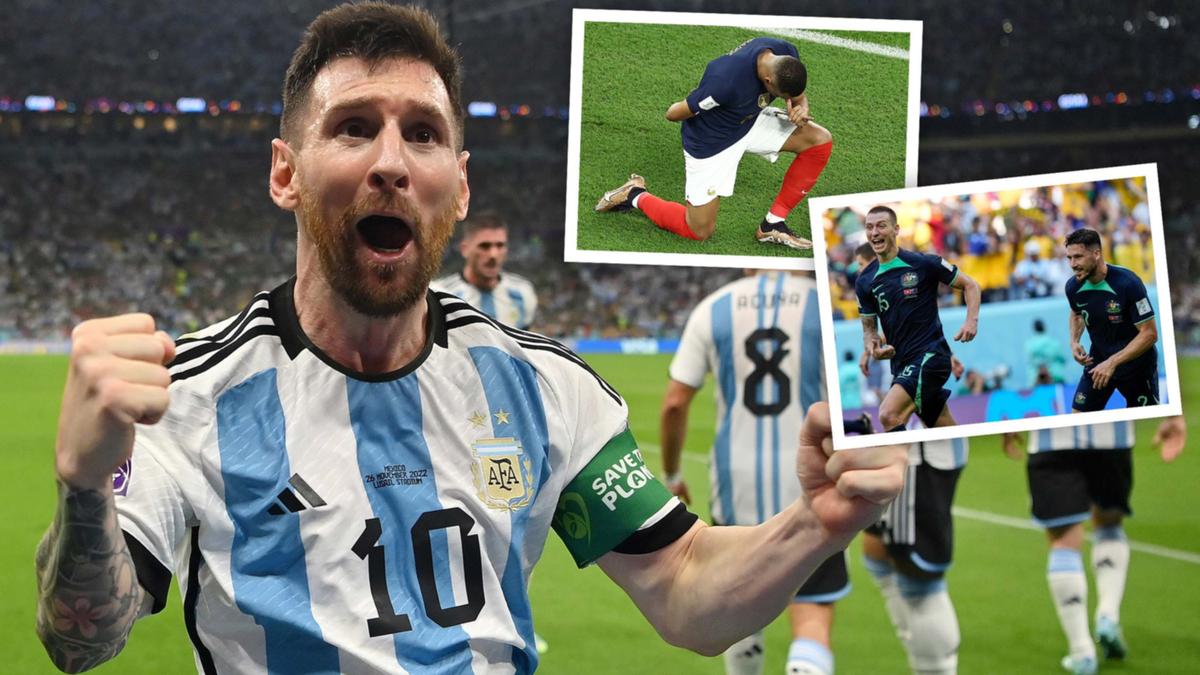 Wake up each morning with The West Australian’s World Cup Wrap, bringing you a summary of the games, goals and main talking points from all the overnight action.

The dream is alive

Australia’s hopes of escaping their group for just the second time in history are still alive, now likely needing just a point against Denmark to go through.

Mitch Duke scored a famous World Cup goal for Australia and became just the eighth man to do so when he headed on an at-pace deflection and found the far corner of Aymen Dahmen’s net.

By the time the goal came after just 23 minutes the commanding and much-improved performances from Jackson Irvine and Aaron Mooy had already swung the midfield battle Australia’s way and a fiery moment involving Duke and Tunisian substitute Hannibal Mejbri was the only other flash-point of the first period.

And while Duke’s header will be the defining moment of the country’s first World Cup finals win since 2010, a monumental second-half defensive effort was what separated the teams.

Captain Mat Ryan saved all four of Tunisia’s efforts on goal, while towering Scotsman Harry Souttar produced one of Australian footballs greatest ever defensive efforts. He won 100 per cent of his tackle attempts, made three blocks and six clearances.

The country held their breath as Souttar made a desperate last-man tackle with just five minutes to go to blunt Tunisia’s best attacking foray of the game.

The Socceroos now play Denmark on Wednesday night — meeting for the second time in as many World Cups — and if France defeat Tunisia, Australia will need to pinch just a draw off Christian Erikson’s side to go through.

Duke’s 23rd minute winner was met by flares in the heart of Melbourne has thousands of people celebrated the clever finish.

It’s been met with international praise, including from Fox Soccer and social media giant Bleacher Report in the United States.

It comes after fans gathered in the same spot for smaller but no less passionate celebrations for Craig Goodwin’s goal against France in the early hours of Wednesday morning.

Argentina made four changes to the side that was shocked by Saudi Arabia in their opening game and the tournament favourites got their campaign back on track with a win over Mexico — thanks to their little master.

Lionel Messi’s 64-minute strike equalled Diego Maradona’s World Cup goal tally of eight and moves him a step closer to lifting the trophy — as Maradona was the last to do for Argentina.

An Alexis Vega free-kick caught cleanly by Emilliano Martinez was Mexico’s best look for the game on the stroke of half-time.

Messi’s run of missed World Cup free kicks continued when he sent a ball well over the bar after 51 minutes.

Angel Di Maria was a more potent attacking threat than he was in their opening game and in the end it was their backed-in front three that made the difference.

Messi powered a ball home from outside the box to break the dead-lock and Enzo Fernandez came off the bench to finish the game in the dying minutes.

But the Argentinians are still no certainty to go through, needing at least a point against Robert Lewandowski’s Poland in their final group match to advance through the tournament they were considered favourites for.

A Saudi Arabia win over Mexico would complete their fairy-tale, while a win would see the Mexicans sneak home themselves.

Riding the momentum of a historic win over Argentina in their opening game, a bruised but hopeful Saudi Arabia came out blazing against Poland.

And Mohamed Kanno came agonisingly close to putting them ahead, blasting a ball at Polish ‘keeper Wojciech Szczesny which the Juventus stopper was just able to parry away.

But their fearless approach, characterised by driving midfield runs and throwing players forward came back to bite when an otherwise uninspired-looking Poland scored against the run of play.

Piotr Zielinski’s goal came straight from a goal-kick and via a clever piece of play by Premier League full-back Matty Cash.

Saudi hopes of qualification were hottest when stand-in captain Salem Aldawsari stood up to the penalty spot, but from the moment his shot was saved and Mohammed Alburayk’s follow-up was blazed over the bar — it was all Poland.

Lewandowski scored his first ever World Cup goal late in the piece to leave them with four points after two games.

Mbappe too great for Danes

Just as good as he was in a blistering hour-long performance to sink Australia, Kylian Mbappe scored a brace to beat Denmark and put France into the round of 16.

Denmark had already defeated France twice this year in the UEFA Nations League and hadn’t lost to their European counterparts since 2015.

Mbappe spurned an early chance after half an hour but made up for it when he cashed in at the end of a rapid break in the second-half.

Hulking Barcelona centre-back Andreas Christensen pounced on a ball France couldn’t kill from a corner and headed home a trademark equaliser, but the deadlock was fleeting.

Mbappe scored again, this time a tap in from a stunning Antoine Greizmann cross after a perfectly timed run.

It confirms France’s qualification, with Australia now needing Les Blues to take care of one more opponent, the winless Tunisia, to help their cause.