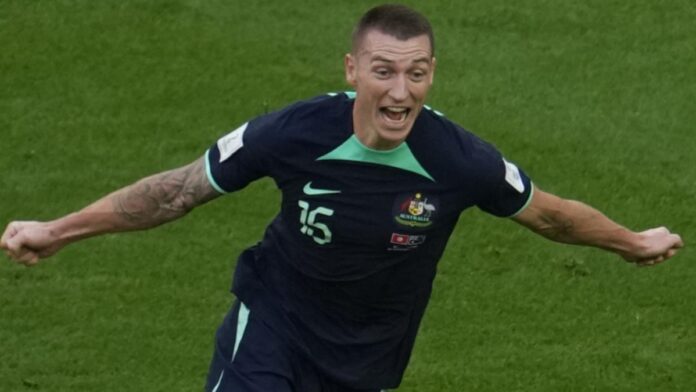 Australia are daring to dream in Qatar after Mitch Duke became the eighth Aussie to score at a World Cup, giving Australia a 1-0 lead at the half.

It was just reward for the Socceroos, who dominated the opening 45 minutes at Al Janoub Stadium, leaving Tunisia on the back foot with ferocious pressing and quick passing.

Duke found himself in the perfect spot as a cross from the far wing took a deflection off a defender, ballooning on towards the waiting goal sneak.

It was anything but a straightforward chance as Duke contorted his neck, angling his forehead to guide the ball into the back of the net to rapturous Australian cheers.

The 31-year-old remained in the thick of the action, throwing his body into the fray and Tunisian players alike.

He got his head on the end of a set piece delivered by Aaron Mooy, but this time the ball went straight into keeper Aymen Dahmen’s grateful gloves.

However, Australia can count themselves lucky to retain the lead after an amazing last-ditch block from Harry Souttar denied the Africans minutes before the break, and captain Youssed Msakni missed from point blank in added time.

They used the wings to attack the box with crosses but lacked direction as defenders Montassar Talbi, Yassine Meriah and Dylan Bronn gobbled them up.

Like France, the goal spurred Tunisia into action as they began to fight back.

The Olympics is no place for children