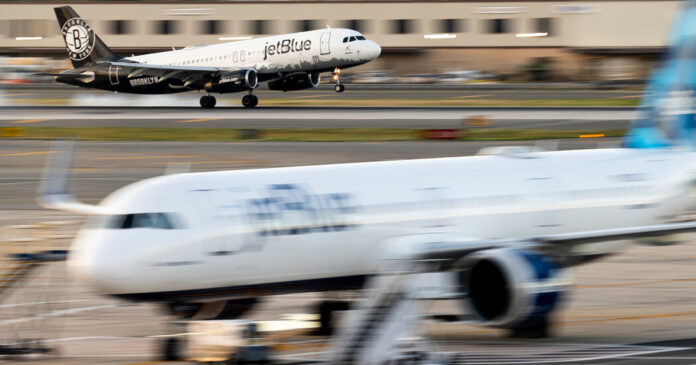 A Utah man was charged with carrying a weapon on an airplane and assault with a deadly weapon after he held a razor near the throat of the passenger sitting next to him, federal prosecutors said this week.

The encounter was the latest example of unruly behavior that law enforcement officials say has become more common in the skies as airline traffic has picked up after a major decline because of the coronavirus pandemic.

The man, Merrill Darrell Fackrell, 41, of Syracuse, Utah, was on a JetBlue flight from Kennedy International Airport in New York to Salt Lake City on Monday when he put his hand in front of the video screen of the woman sitting next to him and told her to pause her movie, prosecutors said.

The woman took off her headphones and realized that Mr. Fackrell was holding what appeared to be a knife — it was later identified as a wood-handled razor with a one- to two-inch blade — inches from her throat, according to a statement issued on Wednesday by from the U.S. Attorney’s Office for Utah.

Mr. Fackrell, who was sitting in the window seat, then stood up and started yelling, “She’s going to be OK” and “No one needs to worry,” according to a complaint filed on Tuesday in U.S. District Court in Utah. He also told the woman’s husband, who was sitting in the aisle seat, to “get out of there,” punctuating the demand with an expletive, charging documents state.

The woman’s husband went to the front of the aircraft to find a flight attendant, and the woman “lunged” for the aisle to escape while Mr. Fackrell tried unsuccessfully to stop her by grabbing her shoulder, according to the complaint.

According to the complaint, Mr. Fackrell, who had “a long and varied” conversation with the woman before the encounter, consumed “several” alcoholic drinks.

A lawyer listed for Mr. Fackrell, L. Clark Donaldson, did not immediately return phone and email messages on Thursday.

The charges against Mr. Fackrell came as airline crews continued to face an unusually high number of disruptions since the start of the pandemic. In 2019, 146 investigations were initiated into unruliness on planes. As of Nov. 1, there have been 767 such investigations in 2022, according to data from the Federal Aviation Administration.

In September, a California man was charged with interference with flight crew members after he was captured on video punching an American Airlines flight attendant during a flight from Mexico to Los Angeles, the Justice Department said. In May, a woman who repeatedly punched a Southwest Airlines flight attendant last year, bloodying her face and chipping three of her teeth, was sentenced to 15 months in federal prison, prosecutors said.

It was not immediately clear on Thursday how Mr. Fackrell had been able to get the razor onto the airplane. The Transportation Security Administration, which has authority over security and passenger screening at U.S. airports, said in a statement that it was working with federal prosecutors, the Federal Bureau of Investigation and the Salt Lake City police on Mr. Fackrell’s case.

The agency is “introducing new X-ray technology at more airports to improve our capability to better detect items such as the one used in this incident,” the statement said. “We commend the actions of the flight attendants and other passengers on this flight.”