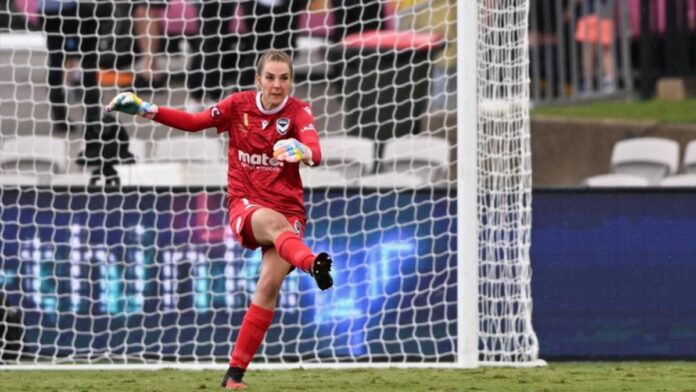 Reigning champions Victory were left stinging after a 1-0 upset loss to Western United first-up while Sydney lost away to Adelaide United by the same scoreline.

Dumont made several big saves to help Victory to a 2-1 win in last season’s decider and urged her side to step up at Cromer Park on Saturday.

“No matter what, playing Sydney’s going to be a tough game and a really good game (with) grit,” Dumont told AAP.

“It comes down to who really just wants it more.

“Both of us have something to prove, Sydney lost as well. So we’re both coming into this game like ‘we want three points.’

“Hopefully it’s like the grand final and both teams rise and it’s just a great game to watch and be a part of – but obviously we want to get the win.”

Victory’s defence switched off for United’s goal in round one and has undergone plenty of change, with Brooke Hendrix, Courtney Nevin and Polly Doran departing.

Kayla Morrison has returned from injury while Jess Nash and Natalie Tathem have joined her and Claudia Bunge in the back four with Elise Kellond-Knight sitting in holding midfield.

“A lot of it was our own individual mistakes. We have a high standard and we just didn’t bring it on the weekend,” Dumont said.

“There were some really good patches from us but a game goes for 90 minutes so the main feedback was those moments where we switched off, we really switched off.

“So we just need to make sure we learn from that and grow and make sure it doesn’t happen again.

“We did the pretty soccer but we didn’t win the game, so we just need to make sure we start getting the ball in the back of the net and being more aggressive on our attacks.”

Victory will regain Lia Privitelli and Gema Simon from injury on Saturday.

Coach Jeff Hopkins confirmed Tathem will miss up to four weeks with a fractured elbow and Emily Kos is likely to slot in at left-back.