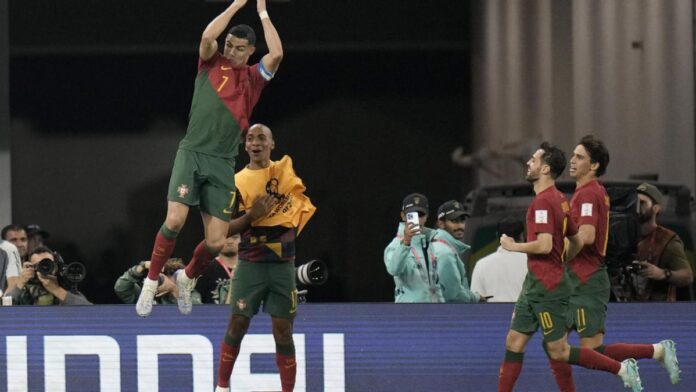 Wake up each morning with The West Australian’s World Cup Wrap, bringing you a summary of the games, goals and main talking points from all the overnight action.

Ronaldo into the record books

It is fair to say the last few months have not gone to plan for Cristiano Ronaldo.

Entering Portugal’s first World Cup game without a club after Manchester United terminated his contract, bringing his tumultuous return to the team to a close, it felt like nothing was going right for the megastar.

But he had every reason to smile as he became the first player in history to score at five World Cups, scoring a penalty to help Portugal beat Ghana 3-2.

After a goalless first half, the game roared to life when Ronaldo was judged to have been fouled in the box and after the referee had waved away Ghanaian protests, Ronaldo emphatically fired home the penalty.

Ghana responded when Andre Ayew took advantage of a defensive lapse to slam home from a few yards out, but Portugal restored their lead soon after from Joao Felix.

It was 3-1 in the blink of an eye as Portugal caught Ghana on the break and Bruno Fernandes slipped a lovely ball through for Rafael Leao to sweep home, before Osman Bukari exploited more poor defending by Portugal to set up a grandstand finish.

Richarlison at the double for Brazil

Brazil entered the tournament as favourites, and an impressive second half display showed why hopes are so high for them in Qatar.

A brace from Richarlison, including an early goal of the tournament contender, broke down a stubborn Serbian side who made The Selecao work for their win.

Alex Sandro came closest to breaking the deadlock on the hour mark when his vicious long-range strike ricocheted off the post, but Brazil took the lead soon after when Vinicius Junior’s strike was parried into the path of Richarlison, who made no mistake from close range.

The Tottenham star, who had very much been on the game’s periphery until his goal, then dropped jaws with a sumptious volley for his second.

Collecting Vinicius Junior’s cross in the air, Richarlison flicked the ball up, spun around and acrobatically smashed the ball into the back of the net, leaving Vanja Milinkovic-Savic in goal with no chance.

Uruguay and South Korea played out an at-times entertaining 0-0 draw as both sides ensured they stayed in touch with Portugal in Group H.

Featuring two teams oozing with attacking quality, both sides struggled to break the other down and for the most part were reduced to long range potshots.

Both Uruguay and South Korea had long spells of sustained possession, but neither were able to turn it into goals, with Mathias Olivera’s heavy pass on a counter attack wasting Uruguay’s best chance of the first half, while an unmarked Ui-Jo Hwang blazed disappointingly over up the other end.

Diego Godin hit the post from a corner just before half time, but second half chances were few and far between as some desperate defending prevented either side from taking the lead.

Federico Valverde almost won it late for Uruguay, but his long-range effort cannoned off the post.

Switzerland did enough to take all three points from their opening group game as they prevailed 1-0 over Cameroon.

The Swiss entered the game as favourites, but struggled to properly establish a foothold in the first half and it was instead Cameroon who settled quicker.

Only a last ditch tackle from right back Silvan Widmer stopped Ekambi from opening the scoring, and Switzerland made Cameroon pay for not scoring after half time.

Xherdan Shaqiri found space on the right and picked out an unmarked Breel Embolo from six yards out and the striker made no mistake, although he opted not to celebrate the goal, which came against the country of his birth.

Embolo’s strike was enough to give Switzerland victory as Cameroon wilted in the second half heat, unable to properly test Jans Sommer in goal.

NSW Ambulance gets $1.76 billion lifeline for new paramedics and stations