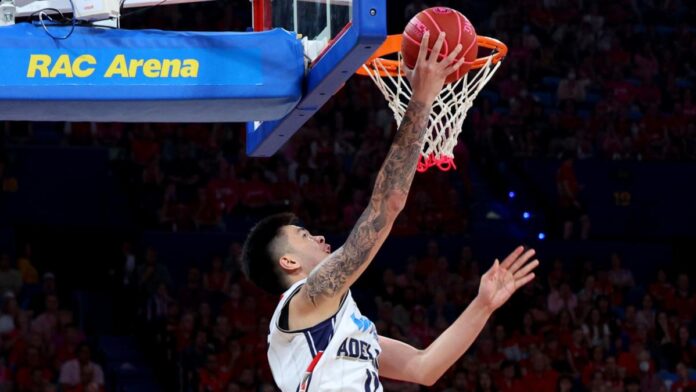 Adelaide thoroughly scouted the Perth Wildcats’ inability to stop teams from scoring in the paint and then honed in on that weakness during Thursday night’s win at RAC Arena.

The 36ers won the match 96-82 and scored a whopping 60 of those points in the paint. That effort followed a trend which stood out to Adelaide coach CJ Bruton in the build-up to the match.

The Wildcats had conceded 220 points in the paint from their previous five games and scored only 150 of their own.

Bruton said it made sense to attack the Wildcats where they’d been vulnerable against other teams.

“If you go over the numbers and the teams that have come in here and had success, or had success against them, you need to keep punching a hole where it is,” Bruton explained.

“To get our open shots, we don’t shoot 35 threes. We keep moving the ball and if they present themselves there, then we’ll take them. We found a crutch and we kept going at it.

“We were finishing well around the rim and it led to the results we had tonight.”

Adelaide’s dominance around the rim led to them shooting at 56 per cent, which was their best result for the season.

They also clear won the rebounds 44-34, despite only leading that battle by two at half-time.

Rebounding has been an issue for the Wildcats all season but coach John Rillie said Thursday night’s problems were more related to Adelaide domination in the paint and his players getting caught in difficult defensive positions.

He promised a thorough review of why Adelaide got to the rim so easily before having a clear stance.

“I would say it depends on how those points are given up,” Rillie said.

“Once I look at the film and see how we gave up those points, that will give a better indication of whether it was good or bad. But when you give up that many points, there’s going to be a lot of bad.”

The Wildcats’ next match is against Brisbane on Thursday. The Bullets are 3-6 and sacked coach James Duncan on Friday morning.