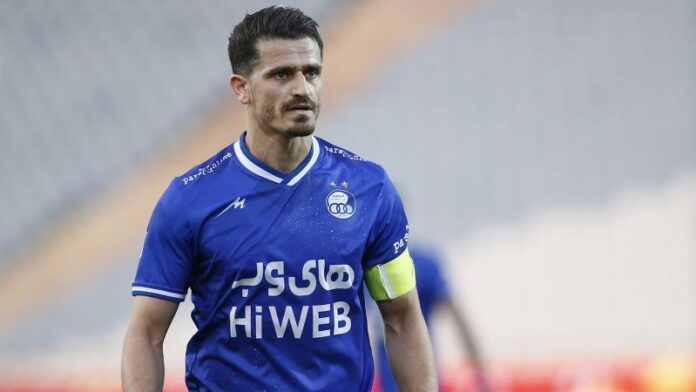 An Iranian-Kurdish footballer has been arrested on charges of “incitement against the regime” as Tehran cracks down on anti-government protesters, according to state-aligned news agency Tasim.

Voria Ghafouri, who plays as a defender for the Khuzestan Foolad soccer team, was also arrested on charges of “dishonorable and insulting comportment towards Iran’s national soccer team.”

“Ghafouri had some harsh reactions in support of the recent rioters and was inciting them,” state affiliated Fars News Agency reported.

London-based opposition news outlet Iran International said the star footballer was fired in June from his previous team, Esteghlal FC, for criticizing the government in May when he rebuked it for “its handling of protests sparked by a sudden rise in prices.”

Iranian authorities criticized Ghafouri in relation to the protests earlier in the year, sparked by a spike in food prices after the government cut state subsidies causing costs to shoot up by 300% in some cases.

Iran has since been swept by national anti-regime demonstrations set off by the death of Mahsa Amini in September, a 22-year-old Kurdish Iranian woman who was detained by the country’s morality police for allegedly not wearing her hijab properly.

The demonstrations have shed light on longstanding grievances held by the country’s Kurdish minority group, whom security forces have targeted in their brutal campaign clamping down on dissent in Iran.

Ghafouri is from Sanandaj, Iran’s second largest Kurdish city, according to the Norway-based Hengaw Organization for Human Rights.

Ghafouri joins a slew of Iranian athletes who have spoken out in support of the national uprising.

Iran’s former national team goalkeeper, Parviz Boroumand, was arrested last week for destroying public property in Tehran during a protest on November 15, according to Tasnim.

Boroumand, 47, played for Persepolis FC and Esteghlal FC before retiring in 2007 to focus on social activism and humanitarian work. He was outspoken in his support of protesters in Iran on his social media channels before his arrest.

Former Iranian footballer Ali Karimi posted his support for Ghafouri and Boroumand after their arrests. “For the honorable Ghafouri,” Karimi tweeted Thursday along with a picture of Ghafouri dressed in Kurdish garb.

Karimi, who now lives outside of Iran, has been subject to intense scrutiny from the Iranian government for vocalizing his support for protesters since late September.

In November, archer Parmida Ghasemi demonstrated her support for anti-government protests by removing her hijab during an awards ceremony in Tehran. Iranian climber Elnaz Rekabi competed in South Korea without her mandatory hijab on in the month prior, later saying it had fallen off accidentally. However, it was unclear whether Rekabi’s comments were made under duress.

Hummus, Tahini and Other Tastes of Home in Jerusalem’s Old City

Hamas Releases Video That Appears to Show Israeli Missing Since 2014

Britain Says It Will Give Ukraine Tanks, Breaching a Western Taboo

Palestinian Anger With Israel Is Undimmed, Even With Battle Paused