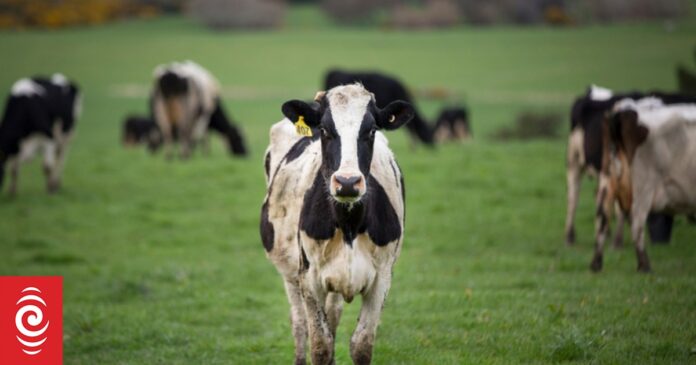 A Northland farmer fears immigration red tape will see an experienced German dairy hand walk away from a job vacancy that she desperately needs to fill.

Katrina Pearson said applying for a work visa under the Accredited Employer Scheme had been a bureaucratic nightmare.

Pearson needs two full-time staff, but she is struggling to recruit.

When the borders opened in July she thought her prayers had been answered.

She reached out to a former staff member who had returned to Germany on a Covid mercy flight.

That was the easy part.

“I mean I’ve got a farm to run as well, so I can’t just be on the phone waiting for someone to answer it.”

Securing an Accredited Employer Work Visa is a three-step process.

The prospective employer must first be approved and then a job check done – involving the vacancy being advertised locally for two weeks – before the prospective worker applies for a visa.

“They [Immigration] had confirmed that there was sufficient details in the job ad and then yesterday I emailed them to say I know the two weeks is up tomorrow so what’s the next step – I’ve had no successful applicants. And then they replied and said your job ad isn’t sufficient you’ll need to advertise for two more weeks.

“It was pretty gut-wrenching to get that news when you are heading into the holiday period and the one staff member I do have, I want to give him some time off over Christmas and New Year’s and if I don’t have Felix here by then neither of us will be able to take time off.”

Federated Farmers immigration spokesperson Richard McIntyre said many of its members were annoyed at the lack of clarity around the Accredited Employer Work Visa application process.

“From a farming point of view we are talking about people who are short staffed and have been for a while and in particular when this first began which was during calving there were a lot of tired people that could potentially miss a couple of details and be another couple of weeks without a staff member as a result, so there’s quite a bit of frustration there.”

The dairy sector alone was short of 2000 staff and farmer owners were feeling the strain, he said.

“The system is starting to get a little bit strained everyone is reaching a little bit of a breaking point here, so we need to get more of these migrants in, we need backpackers to come in as well to provide cover just to give the farm teams and the employers or farm owners a bit more time off and a chance to reset.”

McIntyre was confident the teething issues with the Accredited Employer Work Visa would eventually settle down and it would be better than its predecessors.

Katrina Pearson said she had already spent $1500 on the visa process in trying to get a worker in from Germany.
Photo: RNZ / Samuel Rillstone

“To assist employers as they adjust to the new Accredited Employer Work Visa policy, and recognising the current unprecedented labour market, we continue to take a pragmatic approach, which includes contacting employers to help speed up the process and receive information more quickly.

“This helps to ensure job check applications are assessed and decided faster, while providing employers with an opportunity to remediate any issues with their application prior to the migrant applying for a work visa.”

Where an applicant or employer had not provided all of the relevant information, this could impact Immigration’s ability to process the application in a timely manner, Hogg said.

“There have been instances where employers have not advertised the roles correctly in order to meet the immigration instructions despite completing all required declarations on application confirming that they meet all aspects of the Job Check instructions. The main issue predominantly relates to not having specified the salary for the position in the advert.”

That was cold comfort to Katrina Pearson – who had spent more than $1500 on the process so far.

“Felix is still in Germany waiting to hop on a plane to come to New Zealand. I am anxious that he might just decide the process is taking too long and say ‘flag it I’m going to carrying on dairy farming in Germany because it’s easier and my family is here and I’ve changed my mind’.”

By the numbers (Source Immigration NZ)

Since May 2022 when Employer Accreditation applications opened, 14,576 have been received. Of those, 13,999 have been approved and two have been declined. On average, applications are being processed within five working days.

Since June 2022 when Job Check applications opened, 15,378 have been received. Of those, 14,142 have been approved and 11 declined. On average, applications are being processed in four working days.

Since July 2022 when Accredited Employer Work Visa applications opened, 22,033 have been received. Of those, 11,351 of have been approved and 35 declined. On average, applications are being processed in 16 working days.

Abuse in care inquiry: Victims distressed as wait for compensation drags on

Gottfried Lindauer paintings stolen five years ago have been recovered

Educational groups at odds over mandatory reporting of child abuse

Coastal residents in Porirua and Kāpiti warned ahead of forecast heavy...