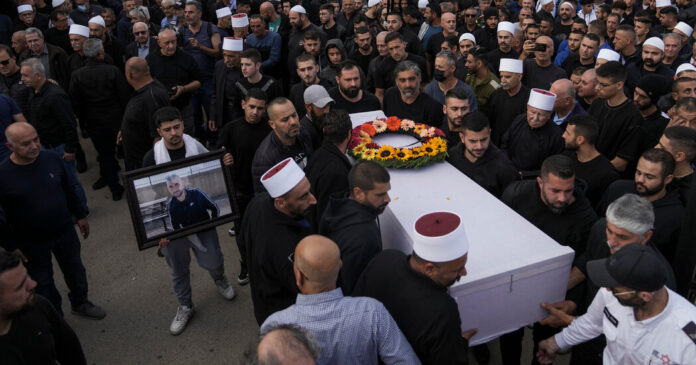 JERUSALEM — When Palestinian militants hid the body of an Israeli schoolboy on Tuesday night, they hoped to exchange it for the corpses of dozens of Palestinians that have been held by Israel for years without burial.

Instead, they set off an unusual diplomatic effort to retrieve the body, involving an unlikely cast of actors from opposing sides of the Palestinian-Israeli conflict.

Disturbed by the militants’ move, Palestinian officials worked with Israeli military commanders, Arab lawmakers and Muslim clerics in Israel, and even indirectly with militant leaders in Gaza and Lebanon — all of whom helped to secure the body’s release, according to interviews with six mediators from three countries.

It was a surprising moment of common cause between people who rarely work together, one that highlighted the complexities of Arab and Israeli society, surfaced the hidden relationships between Palestinian and Israeli leaders, and shined rare attention on the Israeli practice of holding onto the bodies of slain Palestinians accused of terrorism.

“We needed everybody to talk with his enemy,” said Rafik Halabi, the Arab mayor of the schoolboy’s hometown in Israel, who was central to the mediation efforts. “The situation we live in is very, very complicated.”

At the center of the tragedy was a 17-year-old Israeli citizen, Tiran Fero.

Tiran was one of roughly 150,000 Israeli Druse — a small subsection of Israel’s Arab minority, which forms about a fifth of the population of 9 million. The Druse play an unusual role in the conflict: Unlike other Arabs in Israel, they typically serve in the Israeli Army — yet as native Arabic speakers, they also move easily within Palestinian cities in the occupied West Bank.

On Tuesday morning, Tiran took advantage of that cultural fluidity to drive from his hometown in northern Israel, Daliyat al-Karmel, to the occupied West Bank. Accompanied by his lifelong friend, Adir Daksa, also 17, Tiran hoped to buy a new speaker system for his car, according to Adir’s father.

Tiran lost control of the vehicle while driving through an area of the northern West Bank administered semi-autonomously by the Palestinian leadership, the Palestinian Authority, according to the authority’s internal account of the incident that was obtained by The New York Times. Both teenagers were seriously wounded.

Adir’s injuries were marginally less critical, allowing Palestinian health officials to transfer him to Israel, where he was airlifted to an Israeli hospital and is still alive.

But Tiran needed more immediate medical attention, so he was moved to a hospital in Jenin, a city administered by the Palestinian Authority that has been the focus of regular raids by the Israeli Army this year.

Later on Tuesday, militants in the city heard about Tiran’s presence. Thinking he was an Israeli soldier, masked men armed with assault rifles invaded the hospital shortly after 8:30 p.m. on Tuesday night, according to video from the scene, mediators’ testimony and the Palestinian Authority’s internal account of the incident.

According to mediators and Palestinian leaders in Jenin, the militants hoped to exchange Tiran for the bodies of dozens of Palestinians kept in Israeli mortuaries since 2016. Israel houses the unburied bodies of 111 Palestinians, 16 of them from Jenin, according to detailed records shared with The Times by the Jerusalem Legal Aid and Human Rights Center, an independent Palestinian rights watchdog.

The Israeli defense ministry declined to comment, but Israeli officials believe that the Palestinians were all killed while committing violence, and that holding on to their bodies may help deter future attacks.

What happened after the militants’ arrival at the hospital is a subject of debate: Tiran’s father, Hussam Fero, who had rushed to the hospital to be with his son, said the militants removed Tiran from his life-support machine while he was still alive, killing him.

“My son was breathing — he was breathing and alive,” Mr. Fero told Kan, Israel’s public broadcaster, on Wednesday. “They seized him right in front of me.”

A foreign diplomat involved in mediation efforts, who spoke on the condition of anonymity to discuss a sensitive matter more freely, also confirmed that account.

But Israeli government officials say it isn’t clear what happened, while the Palestinian Authority said that the teenager was already dead when the militants arrived.

In any case, Tiran’s body was quickly taken to a hide-out in a lawless neighborhood of the city, known as the Jenin Camp, where the authority has limited control.

The seizure of the body spread alarm among Palestinians in both the West Bank and in Israel, according to mediators and Palestinian leaders. Israeli officials warned that they would retrieve the body by force if it was not returned voluntarily — a messy operation that could have nudged an already tense situation in the West Bank toward all-out chaos.

The militants’ actions also felt unethical to many Palestinians. While there is widespread Palestinian anger at Israel’s own practice of withholding Palestinian corpses, many felt the gunmen had picked the wrong target, particularly after it became clear that Tiran was a schoolboy, not a soldier.

“It wasn’t a moral thing to do,” said Muhammad Sabbagh, the head of a leadership council in the Jenin Camp. “From the beginning, the entire camp wanted to return the body.”

Senior officials from the Israeli Army and the Palestinian Authority are always in contact, to the frustration of many ordinary Palestinians, who feel they receive little benefit from such cooperation, and the officials had already been in contact to coordinate the transfer of Adir.

Those contacts increased after the seizure of Tiran’s body.

The authority’s security services worked through intermediaries to reach the militants, according to Maj. Gen. Akram Rajoub, the authority’s most senior official in Jenin.

“I immediately realized that a big mistake had been made,” General Rajoub said in a phone interview. “We immediately planned how to get the body back to the family.”

In parallel, several Arab lawmakers in Israel began to call Palestinian leaders in the West Bank and Gaza, asking them to put pressure on the militants, most of whom were believed to be connected to Palestinian Islamic Jihad, an Islamist group.

A Muslim cleric in the southern West Bank was central to those efforts, according to Mr. Fero, while the leader of a banned Islamic movement in Israel, Raed Salah, also released a statement calling on the militants to release the body.

Ahmad Tibi, a veteran Arab lawmaker in Israel, is a leading opponent of the Israeli occupation and a longtime critic of the Israeli policy of holding Palestinian corpses. But Dr. Tibi nevertheless emerged as a key player behind the scenes. He called officials in the Gaza Strip, who called Islamic Jihad leaders in Lebanon, who in turn called their operatives in Jenin, according to Mr. Halabi, the mayor.

Dr. Tibi declined to say whom he had called in Gaza, but confirmed that he had been in touch with people in the strip in relation to Tiran’s case.

A spokesman for Islamic Jihad, Daoud Shehab, denied the group had been involved in the abduction or the mediation.

Despite these mediation efforts, Tiran’s body remained with the militants throughout Wednesday, after a disagreement among them about what to do, General Rajoub said.

The standoff heightened the pressure on the Israeli leadership to retrieve the body by force, particularly after two bomb attacks in Jerusalem on Wednesday morning gave momentum to right-wing calls for tougher action against Palestinian militants.

Rising anger among the Druse community in Israel also threatened to tip the situation out of control. Dozens of Druse Israelis blocked a major highway in Israel on Wednesday night, hoping to draw attention to Tiran’s case. Videos circulated on social media of armed Druse men threatening to take revenge against Palestinians.

By the early hours of Thursday morning, the militants in Jenin finally changed course.

The Palestinian Authority was passed a document “containing information about the location of the body,” allowing “forces from the police and security services” to retrieve the corpse and hand it over to Israeli officials, according to the authority’s internal record of the incident that was obtained by The Times.

Tiran’s funeral took place on Thursday afternoon, on what would have been his 18th birthday.

His death sparked unusual cooperation between Israelis and Palestinians, including those, like Dr. Tibi, who typically find little common ground with the Israeli government.

But Dr. Tibi said the rare collaboration should not obscure wider Palestinian anger at Israel’s policy of withholding the bodies of dead Palestinians.

Dozens of “Palestinian families are waiting for their beloved sons,” Dr. Tibi said. “For their corpses seized and captured by the Israeli occupation.”

A Shabbat to recollect with the prime minister – reporter’s pocket...

Hosting Climate Summit Is Both Opportunity and Risk for Egypt