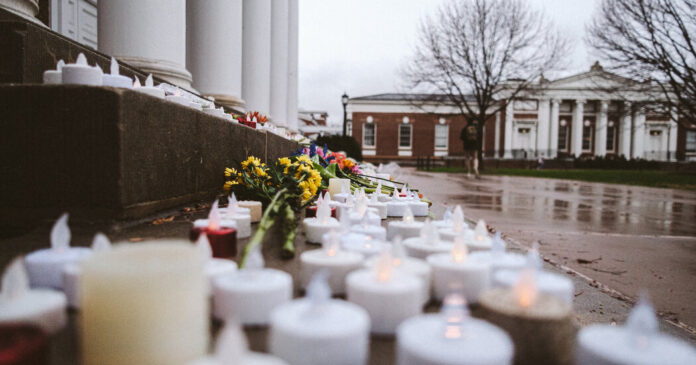 The massacre at a Walmart in Chesapeake, Va., is the second highly publicized shooting in less than two weeks in the state, long a center of the national battle over gun policy. Nine days before the attack on Tuesday, in which at least six people were killed, three students at the University of Virginia were fatally shot on Nov. 13.

Virginia, the longtime home of the National Rifle Association, has historically been dominated by conservatives who favored more permissive gun laws. But after Democrats took full control of the state government in 2019, they passed a significant package of changes.

Policies they passed in 2020 included universal background checks, reporting requirements for lost or stolen firearms, a limit of one handgun purchase per month for most people, and a red-flag law that allows authorities to seize guns from people who pose an immediate threat to themselves or others.

In 2021, the legislature passed another set of measures, including a three-year ban on firearm possession for some people convicted of assaulting a family member. Research shows it is common for mass shooters to have a history of domestic abuse, especially against women.

Even so, Virginia — site of one of the country’s worst mass shootings, the 2007 rampage at Virginia Tech — remains permissive in some ways. For example, it allows the open carrying of handguns without a permit, with some exceptions.

Everytown for Gun Safety, a prominent gun control advocacy group, ranks Virginia 14th in the country for the strength of its gun laws.

Democrats lost control of the governorship and the House of Delegates a year ago, and Gov. Glenn Youngkin, a Republican, has said he would support repealing some of the Democratic-led policies if his party were to regain control of the State Senate.

Asked on Wednesday whether the recent shootings had influenced the policies he would support, Mr. Youngkin’s office referred to comments he made at an appearance in Richmond that morning.

In those comments, he acknowledged the two attacks in quick succession and said that both investigations were still in progress.

“When the facts come in at the end of all the investigations, then we’ll have time to come together and talk about what actions we can take,” he said.

He and Lt. Gov. Winsome Earle-Sears also indicated that they would pursue new mental health policies, but did not specify what those policies would look like.

Trump Settles Suit Over Payments to Hotel for 2017 Inauguration