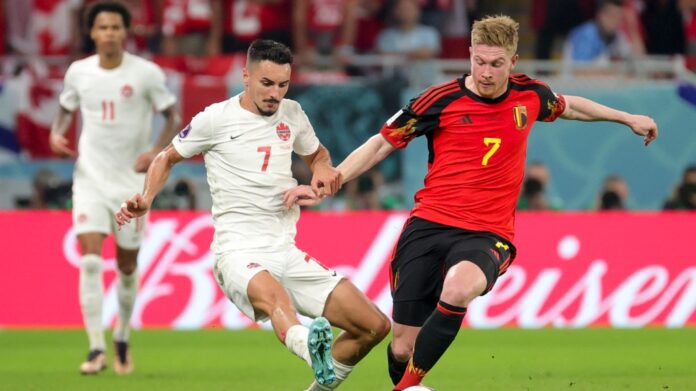 
There will be mixed emotions among Canadian soccer fans after the men’s national team opened its 2022 World Cup campaign Wednesday with a 1-0 loss to Belgium.


Here are three takeaways from the result in Qatar.


This incident will make headlines across the sports world and leaves many scratching their heads.


Canada looked to take the game to Belgium in the opening minutes and the intent to strike first was clear. Viewers who may not be familiar with this team would have been genuinely surprised.


Back in 1986, Canada failed to score in all three group-stage matches at the World Cup and had a chance to make history within 10 minutes against Belgium on Wednesday.


It was puzzling to see the Bayern Munich defender take the attempt rather than forward Jonathan David, who has scored nine of 12 penalties in his career.


Notably, Davies has been out of action since Nov. 5 due to a hamstring injury; this was his first game back.


The penalty miss could have significant implications mentally and coach John Herdman must find a way for his men to shake it off immediately as Canada can’t afford to let it haunt them in its final two games.


Against the second-best side in the world, Canada knew it had a mountain to climb heading into its first match of the tournament.


And while the focus will be on Canada’s inefficiency in scoring, you have to applaud the performance of its defenders to prevent Belgium from running up the score.


When analyzing the roster, Canada’s defence is often deemed its weakest area compared to attack and midfield. However, the narrative changed against Belgium.


Kamal Miller and Steven Vitoria were a very alert partnership at centre-back throughout the match, with the former being truly impressive. Miller led the way with two tackles, one aerial clearance and one interception. Overall, he was a game-changing presence.


Additionally, Richie Laryea’s pace crept up behind Belgium’s attack on more than one occasion and prevented the second-ranked side from doubling the lead with a sliding challenge despite starting his run miles behind the play.


It would not have been a surprise to see this match end with Belgium putting three, four or even five past Canada. Instead, it finished 1-0, which is a significantly positive takeaway for Herdman and company.


CANADA CAN HOLD ITS OWN


The question surrounding Canada was whether or not it could successfully compete against the world’s best, and after 90 minutes against Belgium, the world now knows the answer is yes, it can.


To much surprise, the Canadians took the game to Belgium (outshooting them 22 to nine), put up a fight for possession of the ball (46 per cent) and had more key passes than a side led by world-renowned Manchester City midfielder Kevin De Bruyne (18 to 8).


Simply put, the determined performance against one of the best squads in the world will have other countries taking notice.


So what does this mean for Canada’s World Cup hopes moving forward? Well, the table isn’t something to smile at right now as the group sits at the bottom of Group F behind Belgium (three points) as well as Croatia and Morocco (both with one).


However, given the 0-0 draw earlier in the day, Canada’s chance to qualify for the knockout rounds is a bit brighter. Fortunately, the team has its most challenging match over and done with.


After the full-time whistle, Herdman remained relatively hopeful, admitting he reminded the squad that he opened the 2012 Olympics with a loss while managing the women’s national team. The group then went on to win bronze.


It’s the World Cup, and as seen already in other groups, anything can happen. So even if things don’t go Canada’s way in one week and it exits at the group stage, the country has still truly announced itself on the biggest stage of all after a 36-year wait.


It’s a significant statement you can’t take away from the team.