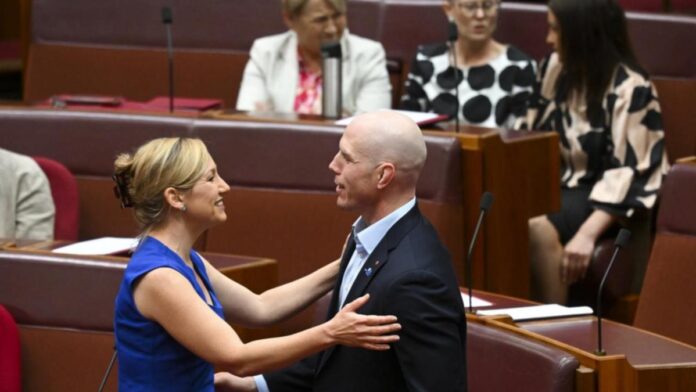 A last-minute bid by Liberal senators to ban children from accessing voluntary-assisted dying has held up the passing of laws restoring territory rights.

Territory MPs and senators are seeking a federal law change to allow the NT and ACT to legislate on voluntary euthanasia.

Senators cheered as the chamber on Thursday voted in favour of the bill heading into its final stage of debate, with 41 votes for and 25 against.

However, it did not progress further – and won’t do so until next week – as Liberal senator Jonn Duniam flagged amendments to ban under-18s from accessing voluntary-assisted dying and review the types and regulation of medication used.

Senator Duniam said his actions weren’t to frustrate the Senate but rather to consider any consequences.

“There are important considerations,” he said.

“I do not seek to frustrate or delay this for any reason other than I want to give these (amendments) a shot.”

The bill passed the lower house in August, 99 votes to 37.

Greens senator Larissa Waters expressed her frustration at not having seen the amendments.

“It’s not like we didn’t know this bill was listed and was coming on,” she said.

The bill was slated for debate on Thursday morning and time was also set aside at the end of next week to handle any overflow and bring it to a final vote after everyone had a chance to speak.

He ha consistently implored his colleagues not to conflate the issue of euthanasia with giving the ACT and NT the right to legislate on the matter.

“I would really plead with the Senate. It’s quite a simple yes or no,” he said.

“People have been able to put their position on record. I understand not everyone is comfortable with this but this is about territory rights.”

He also expressed his concerns about the bill being held up without seeing any amendments in writing.

ACT senator and Finance Minister Katy Gallagher called the vote a “historic moment” for the territories, despite the bill not passing its final stage on Thursday.

But Labor didn’t support Senator Pocock’s move to have the final vote take place, saying any debate on a matter subject to a conscience vote could not be shut down.

Liberal senator Sarah Henderson spoke against the bill, saying it would bring about “state-sanctioned killing”.

Senator Henderson called the push “deeply offensive” despite her personal experience of losing her parents at a young age, both of whom spent some time in palliative care.

“I’ve seen firsthand what families go through reaching the end of life,” she told the Senate.

“This bill, because of its inevitable consequences, is a statement we in Australia are willing to kill our most vulnerable.

“It’s a very poor reflection on society which cannot look after their most vulnerable, particularly those who have a terminal illness.”

All Australian states have legislated to allow voluntary-assisted dying, but not all the laws have come into operation.