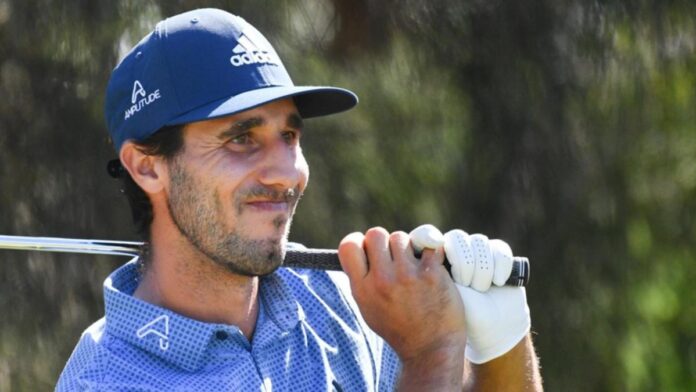 Jason Scrivener isn’t daunted by the company he’ll keep on day two of the Australian PGA Championship and John Lyras learnt plenty while contending for the Vic Open earlier this year.

The pair inched past Cameron Smith (three under) and Adam Scott (five under) to join emerging star Min Woo Lee as overnight leaders at six-under atop a clogged leaderboard at Royal Queensland.

Lyras led for three rounds at 13th Beach in February before falling away on the final day.

“It’s definitely an experience that has definitely helped me grow, a bit of character building,” he said.

“It just helps me realise that I’m good enough to be out here and I belong.

“That’s all I can ask for; just keep coming out here and putting in the work.

“That’s what we play golf for, to be leading every day and that’s what you dream about.”

Scrivener hasn’t lifted a trophy since his breakthrough at the 2017 NSW Open.

But the European tour regular, born in South Africa but raised in Perth, is among the most-credentialed in a stacked field and fresh after closing his 2022 campaign earlier than most.

He’s had three weeks back home, compared to Lee who only flew in on Monday.

“It wasn’t my best year by any means but it was nice to just reset, go home for three weeks and refresh and I’ve been looking forward to these two events (the Australian Open in Melbourne begins next Thursday) for a long time as well,” he said.

“I’ve played enough with some big players over the years, so I feel fairly comfortable up there.

“But I know that if I just do my own thing and plot my way around, I’ll be up there.”