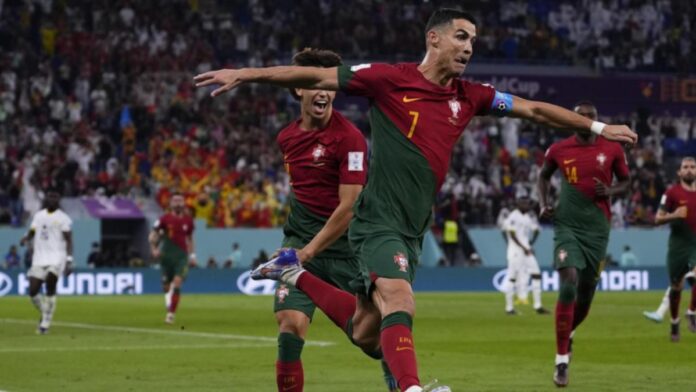 All eyes were on Ronaldo on Thursday following his departure from Manchester United this week and never more so than when he stepped up to take a penalty in the 64th minute after being tripped in the box.

After taking a few deep breaths, Ronaldo confidently beat Ghana goalkeeper Lawrence Ati-Zigi to make history. Until then he had been tied on scoring at four World Cups alongside Pele, Uwe Seeler and Miroslav Klose.

He has now scored in every World Cup since his first in 2006 and has a record 118 international goals.

The penalty broke the deadlock after a tight first half and from then on the goals continued to flow as the error count grew.

Andre Ayew levelled in the 73rd minute – the first goal scored by an African side at Qatar 2022 – when he finished off a fine run down the left by Mohammad Kudus.

But Portugal re-took the lead four minutes later when a superb pass from Bruno Fernandes split the Ghana defence and Joao Felix cleverly clipped the ball over the goalkeeper.

Ronaldo received a huge ovation when he was replaced but he had barely sat down when Ghana made it 3-2, substitute Osman Bukari taking advantage of some lax marking to head in.

In the nine minutes of added time that followed, Portugal goalkeeper Diogo Costa failed to see Ghana striker Inaki Williams behind him when he released the ball inside the box.

But Williams slipped at the crucial moment and Danilo Pereira cleared the ball off the line.

So Portugal survived to move top of Group H and win their opening World Cup match for the first time since 2006.