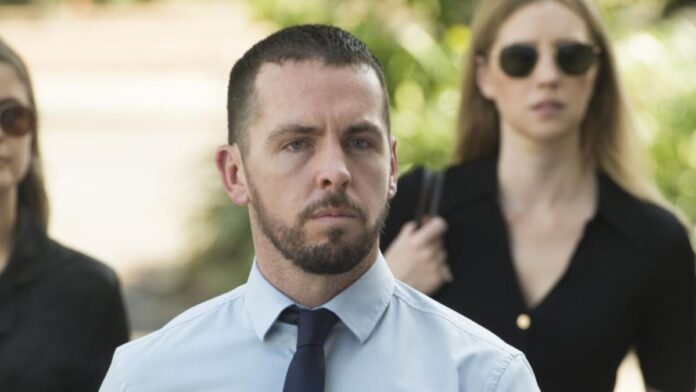 A Northern Territory police officer is likely to know within two weeks if he will be forced to answer a coroner’s questions about the night he fatally shot an Indigenous teenager.

An inquest into the Warlpiri man’s death has been paused amid a Supreme Court legal stoush over whether the 31-year-old has the legal right to refuse to provide evidence to the coroner and the court’s ability to compel him to do so.

Coroner Elisabeth Armitage previously determined that witnesses cannot decline to answer questions by invoking the penalty privilege, which Const Rolfe did when appeared at the inquest last week.

She said penalty privilege was extinguished by the NT Coroner’s Act Section 38, which allows the coroner to compel a witness to give evidence that could incriminate them and for the provision of an immunity certificate from prosecution after doing so.

Const Rolfe’s legal team says the certificate won’t protect him from internal police disciplinary proceedings potentially stemming from his evidence and Section 38 does not abolish penalty privilege and it remains available to their client as a common law right.

The North Australian Aboriginal Justice Agency weighed into the case, arguing that penalty privilege is not available to inquest witnesses for multiple reasons, including Australia’s obligations to international law concerning deaths in custody.

NT Attorney-General Chansey Paech has also intervened, along with the NT Police Force, with both parties backing Judge Armitage’s ruling.

He said allowing witnesses to claim penalty privilege for fear of being subject to disciplinary action if they answer questions would undermine coronial investigations and the intention of the legislation.

“It is a significant encroachment on people’s civil liberties but it is provided for in order to achieve a socially desirable objective, namely that coroners be enabled to assemble as part of their investigation as an inquisitorial court, as much relevant information as possible so as to achieve their objectives,” he said on Thursday.

Const Rolfe was found not guilty in March of murdering Mr Walker. The Indigenous man’s grieving community was outraged over the verdict and said it hoped the inquest would bring justice.

He was temporarily stood down last week from any further evidence at the inquest until the Supreme Court ruling was handed down.

If Justice Judith Kelly finds Judge Armitage’s ruling was correct, the coroner will be able to compel him to answer uncomfortable questions about racist text messages that the inquest has heard he allegedly sent.

Const Rolfe is also likely to be asked about the night he killed Mr Walker and his alleged misuse of police body-worn cameras, excessive use of force and falsified NT police recruitment application.

All told, there are 14 categories of evidence Const Rolfe could be forced to answer questions about, including nine incidents related to investigations over his use of force on the job.

Justice Kelly reserved her decision and said she would endeavour to provide a judgment within two weeks, noting the urgency of the case.

Mr Walker’s inquest is scheduled to resume on Friday for one week of evidence before pausing until late February.

‘It consumed me’: Survivor reporter reveals toll of terror