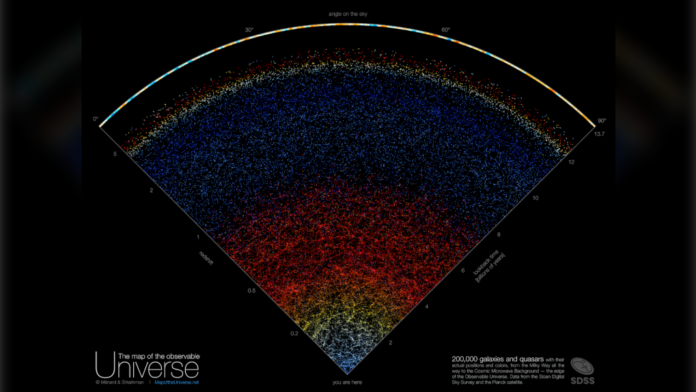 
There’s now a way for everyone who has ever dreamed of being an astronaut to view the universe from the comfort of their home: an interactive map of the known cosmos.


The new map allows you to see around 200,000 galaxies laid out in their actual positions in space and in colour, including parts of space so far away they offer a glimpse of the Big Bang.


It’s a view of the enormous scale of the observable universe that previously only scientists had access to.


Johns Hopkins University astronomers used data collected over the past two decades by the Sloan Digital Sky Survey in order to unlock the night sky for the public.


The idea for the map came from Brice Ménard, a professor at Johns Hopkins who said he grew up gazing at astronomy photos of stars, nebulae and galaxies.


It was that beauty that he wanted to share more widely.


“Astrophysicists around the world have been analyzing this data for years, leading to thousands of scientific papers and discoveries,” he said in a press release. “But nobody took the time to create a map that is beautiful, scientifically accurate, and accessible to people who are not scientists. Our goal here is to show everybody what the universe really looks like.”


He and former Johns Hopkins computer science student Nikita Shtarkman compiled the map of galaxies together.


When zoomed out, the photo looks just like a pizza slice of colourful pointillism — a upside-down triangle filled with countless tiny dots in differing bands of colours.


The farther away from Earth a galaxy is, the longer it takes the light to reach us, meaning that this map also peers deep into the past as well. The map allows us to look up to 13.7 billions of years back in time.


The Sloan Digital Sky Survey is a project based in New Mexico, where a telescope has been painstakingly mapping out the night sky by pointing in different directions to slowly gather pieces of information. Only a fraction of the data it has collected was used to make this new map.


“It has collected data for millions of galaxies out there,” Menard explained in a video from Johns Hopkins University.


Menard said in the video that while there are thousands of individual photos of galaxies, he wanted to compile a map that gave a sense of the sheer scale of the observable universe.


“Seeing the vastness of the universe, it’s quite inspiring,” he said.


The map does not contain the full depth of the night sky — it shows all the galaxies that are packed into a thick “slice” measured by the telescope as it pans across the sky. A full map would be spherical, and also so packed with dotted galaxies that it would be difficult to visualize.


Shtarkman said in the video that the amount of data available makes it easy to create a map, but it’s hard to organize it into a user-friendly map.


“You’re working on basically the biggest scale that there is,” he said.


The map, which can be accessed online or downloaded for free, allows viewers to zoom in on the centre and get a better view of just how many galaxies are clustered together in the image.


As you scroll back in time, the colours on the map shift. This gradient isn’t just for show — the colours of galaxies as they appear to us is actually part of how scientists understand how far away from us galaxies or stars are. Light wavelengths are shifted to become longer and redder as they move away from us with the continuing expansion of the universe, a term called “redshifting”.


At around 7.3 billions of years into the past, galaxies become largely invisible, replaced in the map by brighter quasars, which are massive black holes at the centre of some galaxies and give off a bright blue light as they draw light into them.


At 11 billion years, even quasars become redshifted. And then, at 13.7 billion years, there’s a bright brand of orange and cyan — the “first flash of light” emitted after the Big Bang, which are picked up as radio waves known as the Cosmic Microwave Background.


“We cannot see anything beyond this point,” the map states. “The light travel time to us is greater than the age of the Universe.”


The map also allows viewers to visualize what it would look like in the night sky if we were able to see all of these galaxies with the naked eye in a series of striking images.


At the bottom of the triangular map, the point from which all of the galaxies radiate outward, there’s a little label: “You are here.”


“In this map, we are just a speck at the very bottom, just one pixel,” Menard said in the release. “And when I say we, I mean our galaxy, the Milky Way, which has billions of stars and planets. We are used to seeing astronomical pictures showing one galaxy here, one galaxy there or perhaps a group of galaxies. But what this map shows is a very, very different scale.”


“From this speck at the bottom, we are able to map out galaxies across the entire universe, and that that says something about the power of science.”

People in D.C. not feeling celebratory or charitable regardless of COVID-19...

‘There won’t be occupiers’: City of Ottawa, police prepared for Canada...