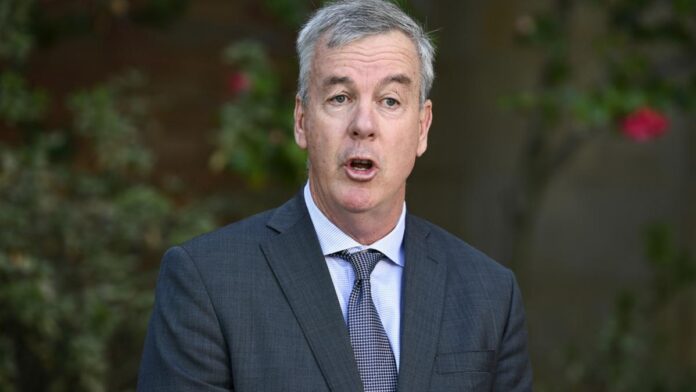 Has WA Attorney General John Quigley missed his opportunity to deal with animal activists and the “mushy-headed vegans” that threaten farmers?

Mr Quigley, firmly in the conversation as a candidate for demotion in the expected McGowan Ministerial re-shuffle, was outraged way back in 2019 when activists targeted farming properties in a highly publicised series of incidents.

Not only was the tough-talking Mr Quigley outraged, but he also promised action.

“I don’t know what the mushy-headed vegans think or why they think but they better get this through their mushy heads — that we are changing the law in a substantial way that spells trouble, big trouble for anyone who goes trespassing on agricultural land with the intention of disrupting agriculture,” he told The West Australian.

The Attorney General uttered those words on May 23, 2019. Three-and-a-half years later and what do we have?

Plenty of cheap talk, no action, and Mr Quigley is staring down the barrel of a couple of years of comfortable inaction on the back benches before retirement.

Certainly, no action on strengthening the trespass laws aimed at deterring a repeat of the incident where vegan activist group Direct Action Everywhere broke into a piggery and broadcast a video live from inside in a bid to highlight what they said were cruel conditions.

Another incident occurred at the property of Harvey farmer Jason Parravicini when activists filmed calves at his property from the public road.

To be fair, the Attorney General has had a bit on his plate the past few years.

His well-publicised campaign against Clive Palmer, which ended up in court, must have been a distraction and caused a dent to the credibility of the State’s leading law officer.

In one of his court appearances during the high-profile Palmer trial earlier this year we should remember that Mr Quigley was described as a “confused and confusing” witness by one of the country’s leading Federal Court judges.

Justice Michael Lee said Mr Quigley “was not a reliable historian of events” — but did not believe he was being deliberately dishonest.

“Regrettably, his evidence was both confused and confusing,” Justice Lee wrote in his judgment.

Perhaps, Mr Quigley was confused when he announced his plan to strengthen trespass laws to protect farmers.

Mr Quigley also had to deal with the fallout from an infamous helicopter ride in 2020 when he hitched an expensive ride to Yallingup.

However, despite those couple of prominent mishaps Mr Quigley certainly has had plenty of time to do what he promised in May 2019.

The McGowan Labor government has shown they don’t mess around in the parliament if there is a piece of legislation they believe needs sorting.

Without any consultation and no mention of his plan during the 2021 election campaign, the Attorney General rammed through changes to Legislative Council voting to get rid of any guaranteed regional representation.

No fuss, all action and very little talk. Especially with regional voters.

And changes to trespass laws were very much on Labor’s agenda – unlike changes to the Upper House, which very definitely weren’t.

At any stage since June 2021 when Labor gained complete control of both houses of the WA Parliament the Attorney General could have marched into the chamber and demanded his proposed changes to trespass on farms become law.

“We are going to give the court the power to make orders against these people that will not only see them on a future occasion prosecuted for trespass but also for being in contempt of court for breaking a court order.”

Perhaps, Mr Quigley’s passion for change was tempered by the left wing of the Labor Party. Soon to be retiring Minister for Agriculture Alannah MacTiernan was not a fan of harsher penalties for anti-agriculture activists.

“There are already significant penalties for trespass in WA — a year imprisonment and a $12,000 fine. These represent a very real deterrent,” Minister MacTiernan told The West Australian in early 2019.

In fact, when the Bill emerged to enact Mr Quigley’s proposed changes it was suddenly titled the Animal Welfare and Trespass Amendment Bill 2020.

That would be an interesting test to apply in response to a series of well-funded, coordinated, and persistent home invasions. We can’t help you until you lift your game and clean up your back yard.

Is time running out for Mr Quigley to finally make good on his promise to WA farmers?

Minister MacTiernan’s retirement has made a certainty of the long-speculated midterm ministerial reshuffle and Mr Quigley has been among those rumoured to get the chop.

If Mr Quigley goes, then the first order of business for the incoming Attorney General should be to make good on the Labor promise to strengthen protections for farmers.

If Mr Quigley stays in the job, then our agriculture sector deserve his complete attention and he has a promise to fulfil.

Steve Martin is a WA Liberals MLC for the Agricultural Region