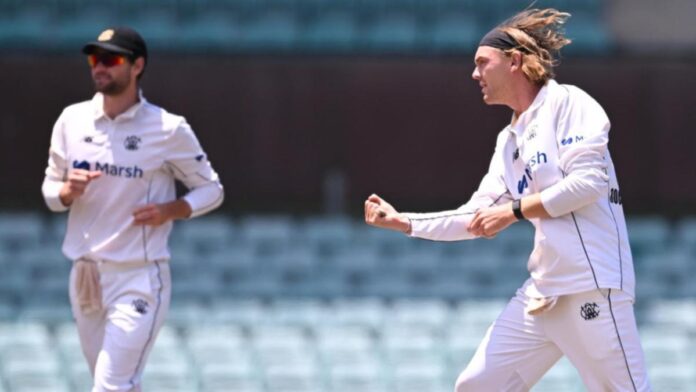 Western Australia are closing in on a fourth Sheffield Shield win of the season, needing four wickets against a faltering NSW batting line-up on a seaming and spinning SCG green top.

The Blues’ not out batters Hayden Kerr (11no) and debutant spinner Chris Green (5no) have a big task ahead of them and need a further 183 runs after another tough morning for batters.

Starting their second innings on day three after being set 268 by the visitors, the hosts made it to lunch at 6-85 after a shaky start.

It took all of 10 minutes for WA to pick up their first wicket.

Matt Kelly, coming around the wicket to left-hander Kurtis Patterson, drew the opener’s edge as he wafted clumsily outside off stump.

Fellow opener Daniel Hughes was next to go, out LBW for six by attempting a reverse sweep off a straight delivery from Corey Rocchiccioli.

Rocchiccioli picked up the wickets of Moises Henriques (14) and Matthew Gilkes (8) before fellow tweaker D’arcy Short claimed his first scalp of the match, bowling Baxter Holt for 15.

On a pitch that has favoured both sets of bowlers, the Warriors’ modest first innings of 233 looks to be the difference, despite the heroics of Green who picked up nine wickets in the game.

The win would cement WA’s spot at the top of the table ahead of second-placed Queensland.

Their opponents on the other hand would drop to last place after fellow cellar dwellers South Australia salvaged a draw against the Bulls on Wednesday.