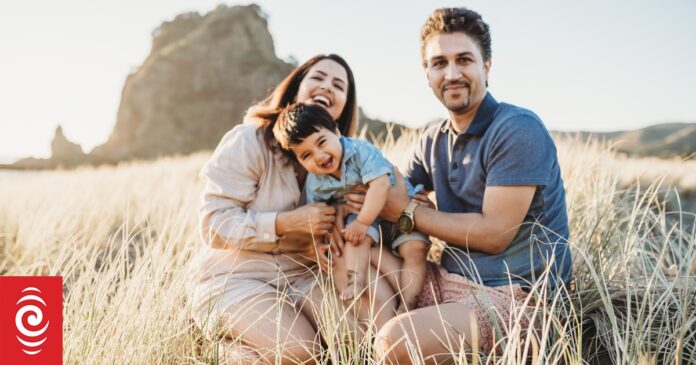 Hamed, Pegah and their son Kiahn, who says he is asking Santa to bring him his Grandma
Photo: Supplied

Relatives planning a Christmas trip to New Zealand to visit loved ones are having to call off their plans after hold-ups to visas.

Flights have been booked for long-awaited family reunions but are having to be cancelled.

Thousands of visitor visas for parents and grandparents were discovered to have got stuck and went unprocessed after a computer system failure.

General visitor visas were also being held up.

Liam Cassidy, his wife and children were looking forward to a trip home from Germany to see his parents for the first time since 2019.

He is from north Canterbury, but his neuropaediatrician wife is from Georgia, which means she needs a visa to enter New Zealand. But delays at Immigration New Zealand (INZ) meant it was too late for them to make their pre-booked flights.

“We were hoping to have the family home for Christmas for the first time in quite a while. My youngest son was born a year and a half ago in April and his grandparents haven’t seen him yet so that’s pretty hard for them.

“But it’s not happening, so we’re pretty gutted. It was pretty hard to say okay, we’re going to have to cancel this time and come again sometime next year.”

For many travellers, an unavoidable transit through Australia meant another visa application after their New Zealand visa was processed. Coupled with lack of availability in flights and cost, the delays were putting a Christmas reunion out of reach.

Ryan Zhao’s father was due to visit from China in 2020 but because of the pandemic, the 76-year-old widower had been planning a trip this year.

Zhao, a software engineer, applied for his father’s visa at the start of August but said their that excitement had turned to uncertainty.

“I have my life here in New Zealand, and I see myself as a Kiwi now,” he said. “It’s just one thing that’s missing for me to feel like a real Kiwi – and that is my family’s not here, which is only my dad now.”

Among the affected families, happier stories of visas arriving just in time for a long-awaited trip do appear.

Iranian mechanical engineers Hamed and Pegah have been desperate for Pegah’s mother to visit after a planned trip to coincide with the birth of their baby was thwarted by the pandemic.

“My only son is now two-and-a-half years old and he just started learning about Santa. He just knows his grandma via video calls and now the only Xmas gift he wants from Santa is his grandma,” Hamed said.

“The visa was sitting under assessment since the 16th of September. We started calling immigration. We called them sometimes twice a day and had to wait on the line three to four hours, but no news. Pegah started to get stressed as the flight date was quickly approaching. The recent weeks have been overwhelmingly stressful for us.”

Hamed woke his mother-in-law at 3am to tell her the good news – the visa had arrived in the nick of time, as she was due to fly today.

Residence visa efficiency to be reviewed

Immigration adviser Matt Simpson has written to the auditor-general asking for a performance audit of Immigration New Zealand (INZ), centred on its new computer system and resources.

“To be honest, if immigration was a business, no one would go see them, right? If there was an alternative way to get a visa they wouldn’t be doing it through Immigration New Zealand.”

Performance had reached a low point with thousands of visa applications sitting in limbo due to operational constraints and system errors, affecting New Zealand’s international reputation and businesses, he said.

He pointed to visas being issued with incorrect or no details on them, system outages and call centre delays.

A spokesperson for the auditor-general said its work programme included looking at residence visa efficiency next year.

“As detailed scoping of this work has not started, we cannot be more specific at this stage on the focus of the audit over and above what is in our annual plan.

Its last performance audit was five years ago, and focussed on INZ’s management of its Vision 2015 Programme

INZ told the Association for Migration and Investment conference three weeks ago it was working to getting back to ‘firm, fair and fast’ decisions and said it was focused on its part in making sure people could be together at Christmas.

Its latest figures from the end of October show 90 percent of visitor applications were processed within nine weeks, against its target of three.

In a statement, its Incident Management Team said INZ recognised there was more work to do to process visas at the speed employers, customers and stakeholders expect, and it was working on processing rates and customer experience.

“Since 1 August we have processed almost 80,000 visitor visas. We continue to receive between 6,000 and 9,000 applications a week and we will always have a steady stream to work through,” team controller Richard Owen said.

“In the case of these visas, our aim is to meet a processing target of 20 working days for straightforward applications. Approximately 34,000 visitor visa applications are still to be processed, and of those about 10 percent remain from August. Some of these may include complex applications or be awaiting further information such as third-party checks.”