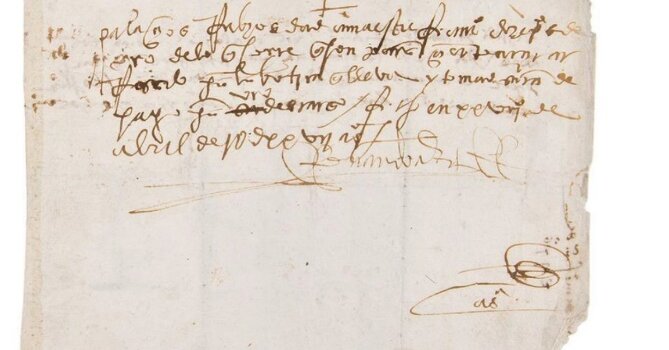 For roughly 30 years, a 16th-century purchase order signed by the conquistador Hernán Cortés, who led the overthrow of the Aztec empire for the Spanish crown, had been missing from Mexico’s national archives and, instead, had made its way to private auction blocks across the United States.

The document from 1527 was stolen from the Archivo General de la Nación de México in Mexico City sometime before 1993, according to a court filing by the U.S. attorney for Massachusetts.

But over the summer, the F.B.I. put an end to the illicit trafficking, even as the investigation on how the document had been stolen remained open. On Tuesday, federal prosecutors announced the recovery of the stolen document with the hopes of repatriating it to Mexico, where its value may not be associated with how much the purchase order would have fetched at auction.

Dr. Susan Elizabeth Ramirez, a chair emeritus of history and Latin American studies at Texas Christian University, said the recovery of documents like this “can change everything.”

“Without manuscripts, we can’t write history,” she said.

The manuscript is a payment order signed by Cortés on April 27, 1527, instructing his butler, Nicolás de Palacios Rubios, to purchase “pink sugar” from the pharmacy in exchange for 12 gold pesos. One side reflects the request and the other side records the payment. According to an affidavit, the receipt is handwritten, in Spanish, in iron gall ink on rag paper and measures about 8.5 by six inches.

The document belonged to the Fondo Hospital de Jesús at the Mexican archives. According to the Mexican authorities, the collection was declared national property and was cataloged in 1929. A manuscript that remains in the collection has a record showing that 12 pesos were used to buy “pink sugar” for the navy’s pharmacy in connection with an expedition.

Cortés set sail for Mexico in 1519 with his sights set on overthrowing the Aztec emperor Montezuma in the capital of Tenochtitlan. The Aztecs initially beat back the Spanish invasion, but Cortés returned in 1521 and took over the city in a siege that burned the lake-bound city to ruins and brought diseases such as smallpox that tore through the population. Within a few decades of the invasion, disease had killed off as many as 20 million Aztecs.

Dr. Ramirez said the document dated to a time when Cortés was exploring to the south of Mexico, around modern-day Honduras, a time when he awarded himself a private work force of about 23,000 people. She said the description of “pink sugar” was most likely in reference to a refinery technique used to make molasses that left behind a hued sugar, something adjacent to brown sugar today.

After the manuscript was taken from Mexico, the document’s provenance cut across the United States. According to an F.B.I. investigation, the manuscript was purchased at an auction in the 1990s by the founder of the Museum of World Treasures in Wichita, Kan. His family consigned the document to Goldberg Coins and Collectibles in Los Angeles, and in 2019, a Florida resident purchased it at auction. That person then contracted with RR Auction in Massachusetts, where the document was put up for auction in June.

The Mexican government flagged the sale of the document to the F.B.I. on June 6. The document received 22 bids; by June 8, when the F.B.I. notified RR Auction of the possibility that the document had been stolen, the bid price was $18,626. The item was then removed from the auction house’s website.

“As soon as we got contacted, we put a stop to the sale, we notified the consignor, and there was no issue from them,” said Mark S. Zaid, a lawyer for RR Auction.

In a statement, the National General Archives of Mexico said it had sent a committee of experts to the F.B.I.’s office in Boston in August to authenticate the document. The document is expected to be repatriated to Mexico.

Dr. Ramirez said trafficking of missing archival items was pervasive across Latin America. A number of items have been stolen from archives in Peru, and a large trove of documents was recovered by the Mexican government and U.S. law enforcement officials in New York City in February. Among the documents included was a letter written by Cortés.

“The problem is structural,” Dr. Ramirez said. “Until the archives are more professionalized, this will continue happening.”

Grocery store shelves aren’t going back to normal this year

Globalization is coming undone, and that’s a huge red flag