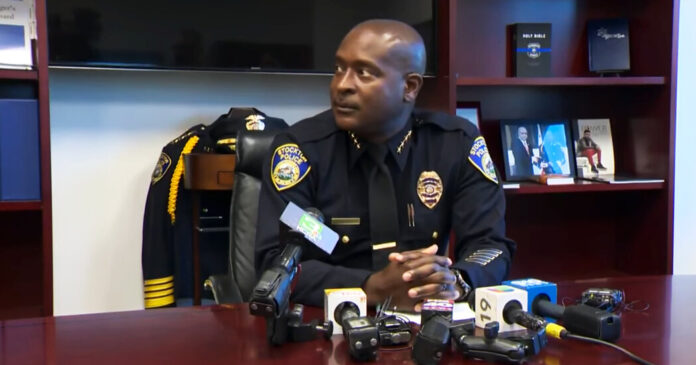 Five homicides in three months, all in similar circumstances, have left some residents unsettled in Stockton, Calif., after investigators said the killings might be related.

The five victims, all men between the ages of 21 and 54, were fatally shot while alone in dimly lit areas at night or in the early morning between July 8 and Sept. 27, the police said on Friday. Four of the men were Hispanic. One was white.

None of the men were robbed; their keys and wallets were not taken, Stanley McFadden, the chief of the Stockton Police Department, told reporters last week. The attacks happened in different neighborhoods.

The police said on Friday that investigators had reviewed hours of surveillance video and were seeking a “person of interest” whom they asked the public to help identify. The police published a photo of that person walking, though the photo offered few identifiable clues.

Investigators do not know if that person was responsible for all five killings or if others were involved, Officer Joe Silva, a Stockton police spokesman, said on Monday.

While the investigation continues, the police have asked residents to remain vigilant, to avoid isolated and dimly lit areas and not to travel alone, if possible.

The police also asked residents to call a tip line with possible leads and to share video that could help in the investigation. The city of Stockton has offered a $75,000 reward for information that leads to an arrest, in addition to a $10,000 reward offered by Stockton Crime Stoppers, the police said.

“We’re pleading with our community: If anybody has information, there is an $85,000 reward,” Officer Silva said. “We do have grieving family members who want some type of closure and we’re asking people to do the right thing and contact us.”

The killings have spread anxiety among some residents and prompted some to wonder whether other unsolved homicides in the city might be connected, said Nuri Muhammad, a program strategy manager at Advance Peace Stockton, a community-based organization dedicated to eliminating gun violence.

“Something is going on in the city of Stockton, and it’s not gang violence,” Mr. Muhammad said.

“People are clearly shaken by it,” he added, and some are concerned that because four of the victims were Hispanic, “there’s an undertone of some kind of racism.”

Residents are feeling unprotected and sense that “things are very, very unsafe — more than usual,” he said.

Officer Silva said that investigators do not believe that the victims were targeted because they were Hispanic. “At this point, we don’t believe that to be a factor,” he said.

Located in the agricultural flatlands of central California, about 80 miles east of San Francisco, Stockton — home to about 322,000 people — has long struggled with poverty and violence.

In 2012, it became the largest city in the country to declare bankruptcy after the collapse of the housing market, the erosion of its tax base and years of mismanagement and overspending. It officially exited bankruptcy in 2015 after addressing more than $2 billion in long-term debt and obligations, city officials said.

Stockton has recorded 43 homicides this year, compared with 39 last year, Officer Silva said. About 12 of this year’s homicides are believed to be gang-related, he said.

The police were examining other unsolved killings to determine if they might be related to the five recent ones that have been linked but have not found others that are connected, Officer Silva said.

“I know there’s been talk in the media and on social media that there’s a serial killer in the city of Stockton,” Chief McFadden said at a news conference last week. “I’m here to tell you that we do not have that information that we have a serial killer in Stockton.”

Harry Black, Stockton’s city manager, said on Monday that the killings did not align with what city officials knew about the crimes that typically occur in the city.

“We track it daily, obviously, we know the ins and outs, and we became aware of this because something just felt irregular about these particular crimes,” Mr. Black said. “It didn’t fall in line with the historical pattern of crime we have from one year to the next, so this is a different situation, an outlier.”

He said that the killings had created anxiety and unease but said the city was trying to respond by communicating frequently with residents and by working to “catch this particular person or persons as soon as possible.”

Toni McNeil, a community organizer at Faith in the Valley, a community group in California’s Central Valley, said that the police were taking the killings seriously and increasing patrols.

A 12-Yr-Previous Lady’s Dream For Pool Dashed After Contractor Runs Off...