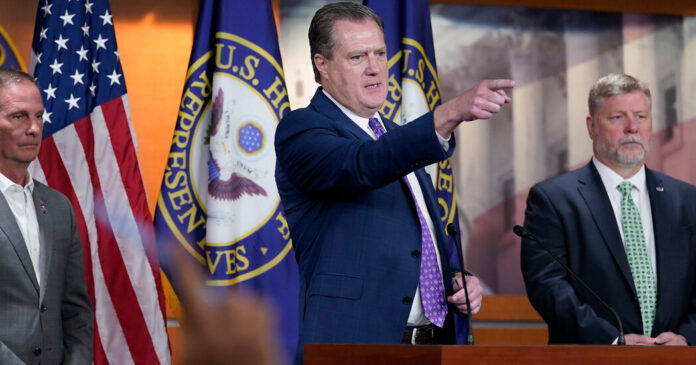 WASHINGTON — The top Republican on the House Intelligence Committee is pledging to return the panel to a robust oversight role and to reduce partisanship on the committee, should his party take control of Congress next year.

That Republican, Representative Michael R. Turner of Ohio, is unlikely to have an easy job doing so, given pressure from fellow Republicans who have said they would begin investigations into President Biden’s family.

“We need to do the job that we were intended to do,” Mr. Turner said in an interview with The New York Times. “I believe that there is a hunger between both sides of the aisle — members who are national security-focused, intelligence community-focused — to get this committee back on track.”

Once an area largely free of partisan politics, the House Intelligence Committee has become a center of intense political battles. With Democrats in control, the fights have focused on the F.B.I.’s and special counsel’s investigations of Mr. Trump and his Russia connections, as well as Mr. Trump’s dealings with Ukraine and his first impeachment.

Democrats have said that responsibility for the partisanship lies squarely at the feet of Republicans and their intense defense of Mr. Trump. For his part, Mr. Turner points to the Democrats’ decision to begin Mr. Trump’s first impeachment investigation in the Intelligence Committee.

Asked if the Intelligence Committee would investigate work in Ukraine by Mr. Biden’s son Hunter, Mr. Turner said the job would go to others in Congress. “I believe that there are some committees in Congress that are probably better focused on the issues, both in authorities and resources, to accomplish that,” he said. Republicans say they want to investigate Hunter Biden’s role at a Ukrainian energy company and involvement with a Chinese billionaire who ran an energy company in China.

Nevertheless, Mr. Turner’s response highlights the limits of what he is trying to do. Even if he succeeds at ramping down partisanship on his committee, other panels like Judiciary — which would be led by Representative Jim Jordan, Republican of Ohio and a fierce defender of Mr. Trump — are set to conduct aggressive hearings on Hunter Biden.

Pressure could also come from within the Intelligence Committee itself, which includes members like Representative Elise Stefanik of New York, a member of the House Republican leadership team. She has been among the fiercest partisan critics of the F.B.I., both for its handling of an investigation into Hunter Biden and its seizing of sensitive documents from Mar-a-Lago, Mr. Trump’s club and residence in Florida.

Like other more establishment-minded Republicans, Mr. Turner is trying to walk a tightrope between Republicans who defend Mr. Trump’s lies about the 2020 election and those who want to focus more on a tougher policy toward China and oversight of the Biden administration’s support for Ukraine.

How Times reporters cover politics. We rely on our journalists to be independent observers. So while Times staff members may vote, they are not allowed to endorse or campaign for candidates or political causes. This includes participating in marches or rallies in support of a movement or giving money to, or raising money for, any political candidate or election cause.

Mr. Turner said the committee would look at gaps in America’s manufacturing supply chain, from the shortages of supplies critical to national security to vulnerabilities in components vital for the defense industry.

On Tuesday, Mr. Turner is set to give remarks and lead a discussion at the Atlantic Council on overhauling the committee.

He is expected to discuss the importance of ensuring that insights from the community are shared with other lawmakers in Congress drafting legislation on China, supply chains, malign foreign influence and other matters.

“We don’t want to just be the people in the basement of the Capitol Hill who learn cool stuff,” Mr. Turner said. “If we’re informed of important intelligence that is handed to Congress, we need to make certain it gets in the hands of those who can translate it into actual congressional work.”

Mr. Turner stressed the importance of Congress in providing oversight of the intelligence community.

He cited a prohibition by intelligence agencies early in the war in Ukraine on sharing information with the Ukrainians about Russian units in the Crimea or Donbas regions, a restriction that was lifted after Republicans on the intelligence committees raised questions. U.S. officials have disputed this account and said the policy was already being revised — not changed because of the lawmakers’ concerns.

But Mr. Turner said that the Biden administration has been, in its support for Ukraine, overly concerned with provoking Russia. The culture of caution, Mr. Turner said, has penetrated down to the intelligence community.

“We’ve become overly cautious,” Mr. Turner said. “So I think it’s necessary for us to be that challenging voice.”

Job scams are on the rise. Watch out for these red...