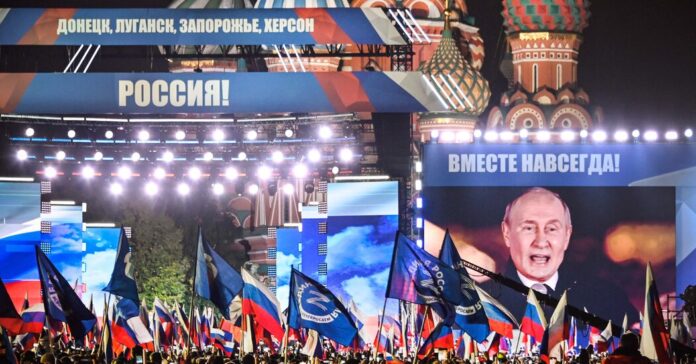 WASHINGTON — For all his threats to fire tactical nuclear arms at Ukrainian targets, President Vladimir V. Putin of Russia is now discovering what the United States itself concluded years ago, American officials suspect: Small nuclear weapons are hard to use, harder to control and a far better weapon of terror and intimidation than a weapon of war.

Analysts inside and outside the government who have tried to game out Mr. Putin’s threats have come to doubt how useful such arms — delivered in an artillery shell or thrown in the back of a truck — would be in advancing his objectives.

The primary utility, many U.S. officials say, would be as part of a last-ditch effort by Mr. Putin to halt the Ukrainian counteroffensive, by threatening to make parts of Ukraine uninhabitable. The officials spoke on the condition of anonymity to describe some of the most sensitive discussions inside the administration.

The scenarios of how the Russians might do it vary widely. They could fire a shell six inches wide from an artillery gun on Ukrainian soil, or a half-ton warhead from a missile located over the border in Russia. The targets could be a Ukrainian military base or a small city. How much destruction — and lingering radiation — would result depends on factors including the size of the weapon and the winds. But even a small nuclear explosion could cause thousands of deaths and render a base or a downtown area uninhabitable for years.

Still, the risks for Mr. Putin could easily outweigh any gains. His country could become an international pariah, and the West would try to capitalize on the detonation to try to bring China and India, and others who are still buying Russian oil and gas, into sanctions they have resisted. Then there is the problem of prevailing winds: The radiation released by Russian weapons could easily blow back into Russian territory.

For months now, computer simulations from the Pentagon, American nuclear labs and intelligence agencies have been trying to model what might happen and how the United States could respond. It is no easy task because tactical weapons come in many sizes and varieties, most with a small fraction of the destructive power of the bombs the United States dropped on Hiroshima and Nagasaki in 1945.

In a fiery speech last week full of bluster and menace, Mr. Putin said those bombings “created a precedent.”

The modeling results, one official familiar with the effort said, vary dramatically — depending on whether Mr. Putin’s target is a remote Ukrainian military base, a small city or a “demonstration” blast over the Black Sea.

Great secrecy surrounds Russia’s arsenal of tactical arms, but they vary in size and power. The weapon Europeans worry the most about is the heavy warhead that fits atop an Iskander-M missile and could reach cities in Western Europe. Russian figures put the smallest nuclear blast from the Iskander payload at roughly a third of the Hiroshima bomb’s explosive power.

Much more is known about the tactical weapons designed for the American arsenal back in the Cold War. One made in the late 1950s, called the Davy Crockett after the frontiersman who died at the Alamo, weighed about 70 pounds; it looked like a large watermelon with four fins. It was designed to be shot from the back of a jeep and had about a thousandth of the power of the bomb dropped on Hiroshima.

The State of the War

But as the Cold War progressed, both the United States and the Soviets developed hundreds of variants. There were nuclear depth charges to take out submarines and rumors of “suitcase nukes.” At one point in the 1970s, NATO had upward of 7,400 tactical nuclear weapons, nearly four times the current estimated Russian stockpile.

By that time, they were also part of popular culture. In 1964, James Bond defused a small nuclear weapon in “Goldfinger,” seconds before it was supposed to go off. In 2002, in “The Sum of All Fears,” based on a Tom Clancy novel, a terrorist wipes out Baltimore with a tactical weapon that arrives on a cargo ship.

The reality, though, was that while the blast might be smaller than a conventional weapon would produce, the radioactivity would be long-lasting.

On land, the radiation effects “would be very persistent,” said Michael G. Vickers, the Pentagon’s former top civilian official for counterinsurgency strategy. In the 1970s, Mr. Vickers was trained to infiltrate Soviet lines with a backpack-sized nuclear bomb.

Russia’s tactical arms “would most likely be used against enemy force concentrations to stave off a conventional defeat,” Mr. Vickers added. But he said his experience suggests “their strategic utility would be highly questionable, given the consequences Russia would almost assuredly face after their use.”

For deadly radiation, there is only one dramatic, real-life comparison on Ukrainian soil: what happened in 1986 when one of the four Chernobyl reactors suffered a meltdown and explosions that destroyed the reactor building.

At the time, the prevailing winds blew from the south and southeast, sending clouds of radioactive debris mostly into Belarus and Russia, though lesser amounts were detected in other parts of Europe, especially Sweden and Denmark.

The radiation dangers from small nuclear arms would likely be less than those involving large reactors, like those at Chernobyl. Its radioactive fallout poisoned the flatlands for miles around and turned villages into ghost towns. Eventually the radiation caused thousands of cases of cancer, though exactly how many is a matter of debate.

The ground around the deactivated plant is still somewhat contaminated, which made it all the more remarkable that the Russians provided little protection to troops that moved through the area in the early days of Moscow’s failed bid to seize the capital, Kyiv, in February and March.

Chernobyl, of course, was an accident. The detonation of a tactical weapon would be a choice — and likely an act of desperation. While Mr. Putin’s repeated atomic threats may come as a shock to Americans who have barely thought about nuclear arms in recent decades, they have a long history.

In some respects, Mr. Putin is following a playbook written by the United States nearly 70 years ago, as it planned how to defend Germany and the rest of Europe in case of a large-scale Soviet invasion.

The idea was to use the tactical weapons to slow an invasion force. Colin L. Powell, the former secretary of state and chairman of the Joint Chiefs of staff, recalled being sent to Germany in 1958 as a young platoon leader, where his primary responsibility was tending to what he described in his memoir as “a 280-millimeter atomic cannon carried on twin truck-tractors, looking like a World War I Big Bertha.”

Decades later, he told a reporter “it was crazy” to think that the strategy to keep Western Europe free was for the United States and its NATO allies to risk using dozens or hundreds of nuclear weapons, on European soil, against advancing forces.

The very name “tactical weapons” is meant to differentiate these small arms from the giant “city busters” that the United States, the Soviets and other nuclear-armed states mounted on intercontinental missiles and pointed at one another from silos, submarines and bomber fleets. It was the huge weapons — far more powerful than what destroyed Hiroshima — that prompted fear of Armageddon, and of a single strike that could take out New York or Los Angeles. Tactical weapons, in contrast, might collapse a few city blocks or stop an oncoming column of troops. But they would not destroy the world.

Ultimately, the large “strategic weapons” became the subject of arms control treaties, and currently the United States and Russia are limited to 1,550 deployed weapons each. But the smaller tactical weapons have never been regulated.

And the logic of deterrence that surrounded the intercontinental missiles — that a strike on New York would result in a strike on Moscow — never fully applied to the smaller weapons. After the Sept. 11 attacks, the Bush administration feared that a terrorist group like Al Qaeda might get a nuclear weapon and use it to destroy the New York subways or irradiate downtown Washington.

The C.I.A. went to great lengths to determine whether Al Qaeda or the Taliban had obtained the technology for small nuclear bombs, and the Obama administration held a series of “nuclear summits” with world leaders to reduce the amount of loose nuclear material that could be turned into a small weapon or dirty bomb, essentially radioactive waste that could be dispersed around a few city blocks.

As the Cold War ended, NATO admitted publicly to what insiders had long concluded, that the rationale for any nuclear use was exceedingly remote and that the West could dramatically reduce its nuclear forces. Slowly it removed most of its tactical nuclear weapons, determining they were of little military value.

Roughly a hundred are still kept in Europe, mostly to appease NATO nations that worry about Russia’s arsenal, estimated at 2,000 or so weapons.

Now the question is whether Mr. Putin would actually use them.

The possibility that he would has sent strategists back to examine a war doctrine known as “escalate to de-escalate” — meaning routed Russian troops would fire a nuclear weapon to stun an aggressor into retreat or submission. That is the “escalate” part; if the enemy retreated, Russia could then “de-escalate.”

Of late, Moscow has used its tactical arsenal as a backdrop for threats, bullying and bluster. Nina Tannenwald, a political scientist at Brown University who studies nuclear arms, recently noted that Mr. Putin first raised the threat of turning to his nuclear weapons in 2014 during Russia’s invasion of Crimea. She added that, in 2015, Russia threatened Danish warships with nuclear destruction if Denmark were to join NATO’s system for fending off missile strikes. In late February, Mr. Putin called for his nuclear forces to go on alert; there is no evidence they ever did.

Last week, the Institute for the Study of War concluded that “Russian nuclear use would therefore be a massive gamble for limited gains that would not achieve Putin’s stated war aims. At best, Russian nuclear use would freeze the front lines in their current position and enable the Kremlin to preserve its currently occupied territory in Ukraine.” Even that, it concluded, would take “multiple tactical nuclear weapons.”

But it would not, the institute concluded, “enable Russian offensives to capture the entirety of Ukraine.” Which was, of course, Mr. Putin’s original goal.

Penn Hills man talks about his release from hospital after 2...