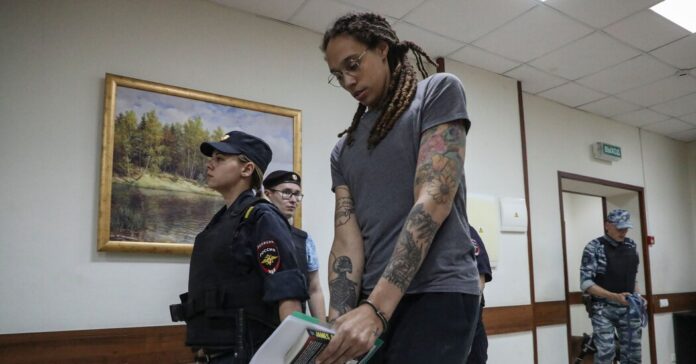 An appeal hearing for Brittney Griner, the W.N.B.A. star sentenced to nine years in prison for drug possession, has been set for Oct. 25, a Russian court said Monday.

Ms. Griner, 31, was arrested in February after landing at a Moscow-area airport, where the Russian authorities say they found two vape cartridges containing hashish oil in her luggage. She was sentenced in August after entering a guilty plea.

The imprisonment of Ms. Griner has posed a major challenge for the Biden administration, which is seeking to secure her release at a time of acrimonious relations with the Kremlin over the invasion of Ukraine, which the United States is supplying with billions of dollars in military aid.

President Biden met last month with family members of Ms. Griner and Paul Whelan, a former U.S. Marine convicted by a court in Moscow of espionage charges. Mr. Biden spoke with Mr. Whelan’s sister, Elizabeth, and then with Ms. Griner’s wife, Cherelle Griner, and her agent, Lindsay Kagawa Colas, to discuss his “continuing commitment” to bringing both Americans home.

In June, the Biden administration offered to release the notorious Russian arms dealer Viktor Bout in exchange for the two Americans. Mr. Bout is serving a federal prison sentence for agreeing to sell weapons to a Colombian rebel group that had been designated by the United States as a terrorist organization, under the belief they would be used against American troops.

While Ms. Griner and Mr. Whelan remain in Russian custody, one of the largest mass releases of Americans detained abroad in recent memory took place over the weekend.

Seven Americans who had been held in Venezuela for years were freed Saturday after President Biden agreed to grant clemency to two nephews of Cilia Flores, Venezuela’s first lady, officials said. Ms. Flores’s relatives had been sentenced in 2017 to 18 years in prison for conspiring to smuggle cocaine into the United States.

At the same time, Iran on Saturday released Siamak Namazi, a 51-year-old Iranian American businessman who had been jailed since 2015, on a temporary furlough and lifted the travel ban on his father, Baquer Namazi, an 85-year-old former official for the United Nations, according to the family’s lawyer.