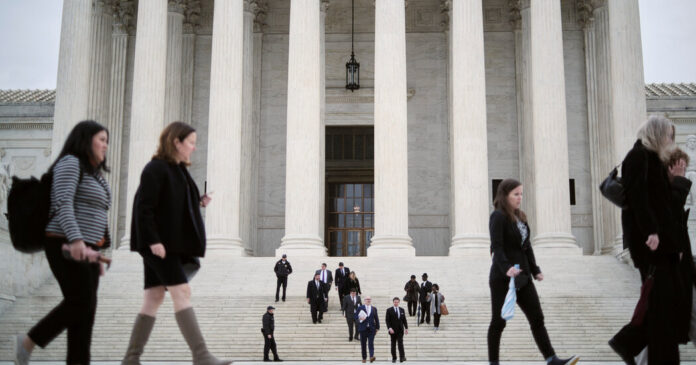 WASHINGTON — In its first argument of the Supreme Court’s new term and the first to feature its newest member, Justice Ketanji Brown Jackson, the justices on Monday considered a dispute over the Environmental Protection Agency’s authority to police some kinds of water pollution.

In June, on the final day of its last term, the court limited the E.P.A.’s power to address climate change under the Clean Air Act.

The new case concerned its authority under a different law, the Clean Water Act, which allows the regulation of discharges into what the law calls “waters of the United States.”

The question for the justices was how to determine which wetlands qualify as such waters.

Much of the argument concerned the meaning of the word “adjacent,” which was used in the law to describe covered wetlands.

Several justices said “adjacent” did not require that the contested property touch or abut a body of water. It was enough, they said, for the property to be nearby.

About 10 minutes into the argument, Justice Jackson asked a series of probing questions about the purpose of the federal law and how to decide whether given wetlands were covered by it.

“Why would Congress draw the coverage line between abutting wetlands and neighboring wetlands,” she asked, “when the objective of the statute is to ensure the chemical, physical and biological integrity of the nation’s waters?”

Affirmative action. The marquee cases of the new term are challenges to the race-conscious admissions programs at Harvard and the University of North Carolina. While the court has repeatedly upheld affirmative-action programs, a six-justice conservative supermajority may put more than 40 years of precedents at risk.

Voting rights. The role race may play in government decision-making also figures in a case that is a challenge under the Voting Rights Act to an Alabama electoral map that a lower court had said diluted the power of Black voters. The case is a major new test of the Voting Rights Act in a court that has gradually limited the law’s reach in other contexts.

Discrimination against gay couples. The justices will hear an appeal from a web designer who objects to providing services for same-sex marriages in a case that pits claims of religious freedom against laws banning discrimination based on sexual orientation. The court last considered the issue in 2018 in a similar dispute, but failed to yield a definitive ruling.

Damien M. Schiff, a lawyer with the Pacific Legal Foundation, which represents the property owners in the case, said that the law meant to strike a balance between “a water quality issue” and “traditional state authority over land and water resources.”

Some of the court’s conservative members said that a broad reading of the law gave the agency too much arbitrary power. Justice Neil M. Gorsuch pressed a lawyer for the agency, Brian H. Fletcher, to articulate a precise and predictable standard for which wetlands were subject to the E.P.A.’s jurisdiction. Mr. Fletcher’s answers did not satisfy the justice.

“If the federal government doesn’t know” what is a covered wetland, Justice Gorsuch asked, “how is a person subject to criminal time in federal prison supposed to know?”

Justice Sonia Sotomayor said the agency could be vulnerable on that point. “Some of my colleagues are dubious that this is precise enough definition” of adjacency, she said, “to survive.”

The case, Sackett v. Environmental Protection Agency, No. 21-454, concerns an Idaho couple, Michael and Chantell Sackett, who sought to build a house on what an appeals court called “a soggy residential lot” near Priest Lake, in the state’s panhandle.

After they started preparing the property for construction in 2007 by adding sand gravel and fill, the agency ordered them to stop and return the property to its original state, threatening them with substantial fines. The couple instead sued the agency, and a dispute about whether that lawsuit was premature reached the Supreme Court in an earlier appeal. In 2012, the justices ruled that the suit could proceed.

In a concurring opinion at the time, Justice Samuel A. Alito Jr. said the law gave the agency too much power.

“The reach of the Clean Water Act is notoriously unclear,” he wrote. “Any piece of land that is wet at least part of the year is in danger of being classified by E.P.A. employees as wetlands covered by the act, and according to the federal government, if property owners begin to construct a home on a lot that the agency thinks possesses the requisite wetness, the property owners are at the agency’s mercy.”

Lower courts then considered whether the Sacketts’ property was a wetland that the agency could regulate, concluding that it qualified under a 2006 Supreme Court decision, Rapanos v. United States, which featured competing tests for deciding that question.

Justice Antonin Scalia, writing for four justices, said that only wetlands with “a continuous surface connection” to “relatively permanent, standing or flowing bodies of water” qualify. Under that test, the Sacketts are likely to win.

Justice Anthony M. Kennedy, in a concurring opinion, required only a “significant nexus” between the wetlands at issue and bodies of waters.

A unanimous three-judge panel of the U.S. Court of Appeals for the Ninth Circuit ruled that Justice Kennedy’s opinion was the controlling one and said that under his test, the Sacketts lost because the agency had been entitled to conclude that their wetlands “significantly affect the integrity of Priest Lake.”

Mr. Schiff, the Sacketts’ lawyer, urged the justices to discard that test as too broad and vague. Justice Kennedy, who retired in 2018, was in the courtroom and watched the argument impassively.

Justice Sotomayor asked Mr. Schiff if “a subsurface flow of water” sufficed to give the agency jurisdiction over the property.

He responded that the problem with “relying upon any sort of subsurface connection is that it essentially renders the test limitless.”

Two justices reflected on their childhoods as they considered the scope of the agency’s authority.

“I grew up in low country Georgia, and you had standing water,” Justice Clarence Thomas said. “That was normal. And I’m thinking of something that’s natural like that is presumptively not covered.”

Justice Amy Coney Barrett said that was nothing.

“Justice Thomas says he grew up in the low country of Georgia, and I grew up in New Orleans,” she said. “The whole thing is below sea level.”

Cape Cod Artist Recycles Plastics Into Art For ‘Hope Is Not...