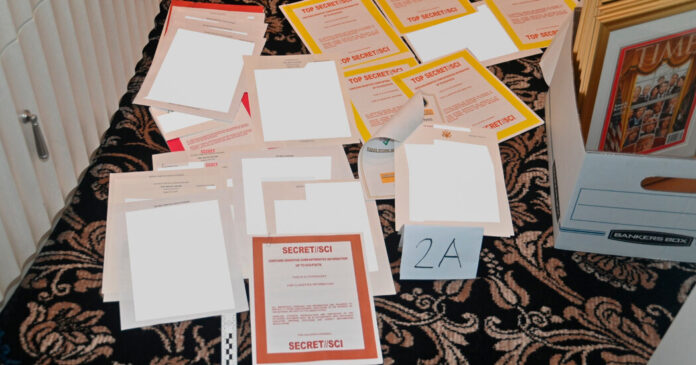 Shortly after turning over 15 boxes of government material to the National Archives in January, former President Donald J. Trump directed a lawyer working for him to tell the archives that he had returned all the documents he had taken from the White House at the end of his presidency, according to two people familiar with the discussion.

The lawyer, Alex Cannon, had become a point of contact for officials with the National Archives, who had tried for months to get Mr. Trump to return presidential records that he failed to turn over upon leaving office. Mr. Cannon declined to convey Mr. Trump’s message to the archives because he was not sure if it was true, the people said.

In fact, Mr. Trump would be found still to have large quantities of government records in his possession even after turning over the 15 boxes. They included one set turned over to the Justice Department by Mr. Trump’s aides in June and another large cache — including some marked with the highest levels of classification — seized by the F.B.I. in the search in August of the former president’s residence and private club in Florida, Mar-a-Lago.

When archives officials opened the initial 15 boxes they recovered in January, they found a large volume of documents with classified markings and notified the Justice Department, setting in motion events that led to a criminal investigation and the search of Mar-a-Lago.

The criminal investigation is ongoing and has been tied up in legal wrangling between the Justice Department and Mr. Trump’s team.

More on the Trump Documents Inquiry

The conversation between Mr. Trump and Mr. Cannon took place after officials at the archives began asking Mr. Cannon, following the return of the 15 boxes, whether additional classified material was at Mar-a-Lago. It was when Mr. Cannon raised this with Mr. Trump that Mr. Trump told him to tell the archives he had given everything back, the people familiar with the discussion said.

The archives had struggled from even before Mr. Trump left the White House to get cooperation and accurate answers from Mr. Trump and his team about his handling of government material under the Presidential Records Act.

The National Archives has told the Justice Department that another lawyer representing Mr. Trump indicated to the archives last September that boxes Mr. Trump had taken from the White House included only nonclassified material like newspaper clippings, according to a person briefed on the matter.

Patrick F. Philbin, a former top White House lawyer who was representing Mr. Trump’s post-presidency office, relayed that message to the top lawyer at the archives, Gary Stern, according to two people briefed on the matter.

Mr. Philbin indicated to Mr. Stern that the information was based on what Mr. Trump’s final White House chief of staff, Mark Meadows, believed to be the contents in the boxes, the people said. Mr. Stern memorialized his own description of the exchange in an email, one of the people said.

The conversation between Mr. Cannon and Mr. Trump raises new questions about Mr. Trump’s attempt to interfere with the efforts by the archives to regain all the documents. And the conversation appears to fit a pattern: In June, after turning over a small batch of classified documents that remained at Mar-a-Lago following the return of the 15 boxes, another one of Mr. Trump’s lawyers attested in writing to the Justice Department that Mr. Trump had returned all of the presidential records the government was seeking.

That claim proved misleading. In August, when the F.B.I. executed a search warrant at Mar-a-Lago, it found thousands of pages of presidential records, including hundreds that contained classified information.

Mr. Cannon was also concerned about people who worked for Mr. Trump going through the boxes of material because he did not know what was in them and was concerned that they might contain classified material.

Mr. Cannon was not the only person who warned Mr. Trump that he could face legal perils if he did not return the material. The New York Times previously reported that in late 2021, Eric Herschmann, a lawyer who had worked in the White House, met with Mr. Trump at Mar-a-Lago about a number of issues and told him that he could face legal consequences if he did not give the boxes back.

Lawmakers call on House Republican to apologize after comparing Lamont to...