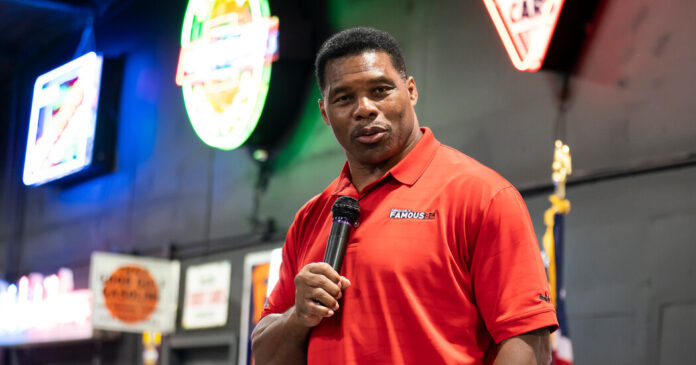 ATLANTA — Herschel Walker, the Republican nominee for U.S. Senate in Georgia and an avowed abortion opponent, paid for his then-girlfriend to have an abortion in 2009, according to a report published Monday in The Daily Beast. Mr. Walker called the claim “a flat-out lie.”

The woman, who The Daily Beast said asked to remain anonymous out of privacy concerns, said that she and Mr. Walker had conceived the child while the two were dating, and mutually agreed not to go ahead with the pregnancy. She said Mr. Walker, who was not married at the time, reimbursed her for the cost of the procedure, the outlet reported.

As evidence, the woman provided a copy of a $700 check from Mr. Walker, a receipt from the abortion clinic and a “get well” card from Mr. Walker, The Daily Beast reported. The outlet published a photo of the card with what it said was Mr. Walker’s signature.

Mr. Walker quickly posted a statement on Twitter and threatened to file a defamation lawsuit against The Daily Beast on Tuesday morning. “I deny this in the strongest possible terms,” he said. “It’s disgusting, gutter politics.”

The development is the latest in a series of potentially damaging reports about Mr. Walker’s personal life since he began his campaign for Senate in 2021. In June, The Daily Beast reported that Mr. Walker, who has criticized absentee fathers in Black households, had fathered a child out of wedlock. Later that week, the outlet reported on two more children he had not previously mentioned publicly or to his campaign aides.

Christian Walker, Mr. Walker’s son who has not endorsed his father’s campaign or appeared publicly on behalf of his father, weighed in on Monday evening, saying on Twitter that “every member” of Mr. Walker’s family urged him not to run for office.

“I don’t care about someone who has a bad past and takes accountability. But how DARE YOU LIE and act as though you’re some ‘“moral, Christian, upright man,”’ he continued. “You’ve lived a life of DESTROYING other peoples lives.”

Mr. Walker has also been found to have exaggerated or misrepresented other parts of his life story: He claimed to have worked in law enforcement when he did not. He exaggerated the origins of a chicken business he founded. After founding a food distribution company, he claimed to donate a portion of his business earnings to charity but there is little proof that the organizations received the funds.

Mr. Walker has made his opposition to abortion a cornerstone of his campaign message, saying repeatedly that he supports bans on the procedure with no exceptions for rape or incest. He has also endorsed legislation recently proposed by Senator Lindsey Graham, a Republican from South Carolina, that institutes a national ban on abortion after 15 weeks of pregnancy. Mr. Graham’s bill does include exceptions for rape, incest or pregnancies that threaten the mother’s health.

“There’s no exceptions in my mind,” Mr. Walker told reporters in Macon, Ga., in May, days before the state’s G.O.P. Senate primary. “You never know what a child is going to become.”

The Georgia Senate race is one of the most closely watched in the country. Most polls show that the race between Mr. Walker and his Democratic opponent, Senator Raphael Warnock, is virtually tied. A spokeswoman for Mr. Warnock’s campaign declined to comment.

More than 60 million people across Southwest are under heat alerts....