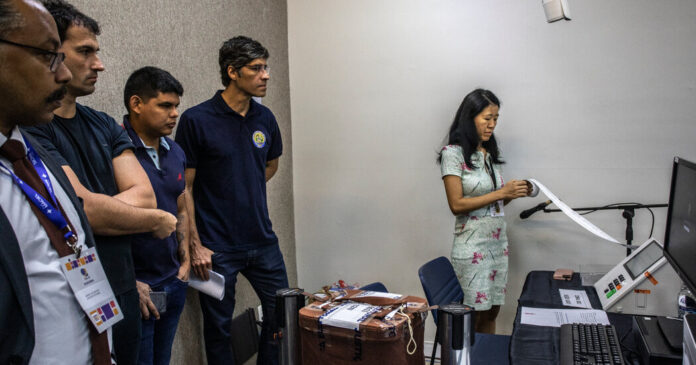 The false specter of an election rife with conspiracy and fraud — this one in Brazil — is spreading around American right-wing media channels from prominent election denialists still fixated on the fiction that Donald J. Trump was robbed of the presidency two years ago. Some used the voting in Brazil on Sunday to try to whip up concern about the approaching midterm elections in the United States.

“Dear Brazil, please watch those vote counts at 3 a.m.,” Mark Finchem, the Republican candidate for Arizona secretary of state, wrote on his Telegram channel on Sunday, Election Day in Brazil. “They are a doozy.”

Mr. Finchem also warned of “suitcases coming out under tables” and “pizza boxes up in front of windows to block poll watchers.” These motifs were based on debunked but prominent conspiracy theories pushed by allies of Mr. Trump who tried to overturn the results of the election in 2020.

Some of the Trump allies sowing doubt in elections helped export their strategy to Brazil after the 2020 election. Donald Trump Jr. warned about Chinese meddling in a speech in Brazil last year, while Mr. Bolsonaro’s son appeared at an event in South Dakota last year hosted by the pillow entrepreneur Mike Lindell, a prominent promoter of election conspiracy theories.

As our colleagues in Brazil have written, Mr. Bolsonaro has been attacking the election system for months and suggesting that if he did not win, it would be due to fraud. There is no evidence of past widespread fraud and Brazil election officials maintained that these allegations are false.

Despite attempts by American election deniers to draw parallels between the two countries, Brazil’s voting system is markedly different from that in the U.S. Rather than using different procedures and equipment in each state, Brazilian voters use the same machines nationwide, and there is no voting by mail. As a result, results can be delivered in a matter of hours.

On Monday, even after the better-than-expected results, some allies of Mr. Trump were in the strange position of continuing to push the idea of election fraud even while celebrating the outcome.

Stephen K. Bannon said on his show on Monday morning that the Brazilian election was an “absolutely central and very stark warning to MAGA and to all the Republicans of the games being played in these elections.” He referred American viewers to a list of vigilante activities they could participate in for the upcoming election in their own country.

Gateway Pundit, a right-wing website, described the election in a headline as experiencing “MASSIVE Fraud” while hailing its outcome.