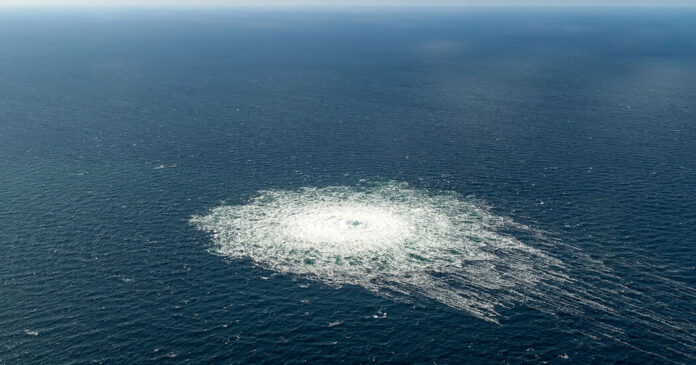 Swedish authorities said Monday that they were monitoring a small leak coming up from the Nord Stream 2 pipeline, one of two natural gas arteries under the Baltic Sea that ruptured last week, further heightening tensions between Russia and the West.

Both strands of the Nord Stream 1 pipeline and one strand of the Nord Stream 2 pipeline were damaged last week in what Russian and Western leaders alike have called an act of sabotage. Much of the speculation about responsibility has focused on Russia, which has suggested the United States was to blame.

Denmark, Germany and Sweden have launched an investigation into what had caused the damage, which they said was so sophisticated that only a state actor could have been responsible. Sweden’s Navy said on Monday that it had sent a vessel capable of “advanced diving missions” to the area around the ruptured pipes.

The pressure inside the damaged strands of the pipelines had dropped to a level equivalent to the surrounding pressure on the floor of the sea, effectively stopping gas from leaking out, the Russian state-owned energy monopoly, Gazprom, said on Monday.

The ruptures came as tensions between Russia and Europe are running high, after Gazprom had halted flows of natural gas to several European countries. It stopped sending gas through Nord Stream 1 last month, blaming technical problems resulting from economic sanctions imposed on Russia.

But the pipeline, as well as Nord Stream 2, which is wholly owned by Gazprom and never went online, were still filled with methane. Gas began gushing to the surface last week at several places above the pipelines, and the authorities established that both strands of Nord Stream 1 and one of Nord Stream 2 had been damaged.

President Vladimir V. Putin of Russia has long sought to pressure Berlin to allow the disputed Nord Stream 2 pipeline to go online. Last year he suggested that it would solve Europe’s energy crisis, as gas prices began to rise.

Gas prices only continued to go up after the invasion. The price of natural gas in Europe is now more than five times higher than it was a year ago, and the European Union and its member states have been calling on businesses and private households to conserve energy, or face the possibility of rationing in the winter.

In a report issued on Monday, the International Energy Agency said that the natural gas market in Europe had contracted by 10 percent in 2022 as a result of the war, with little change expected in the coming year.

“Russia’s invasion of Ukraine and sharp reductions in natural gas supplies to Europe are causing significant harm to consumers, businesses and entire economies — not just in Europe but also in emerging and developing economies,” said Keisuke Sadamori, the director of energy markets and security for the agency.

In Blow to Putin, Turkey Won’t Bar Sweden and Finland From...