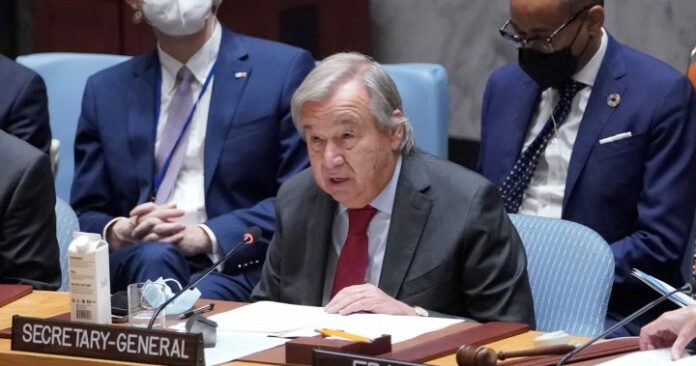 UN Secretary-General Antonio Guterres warned Monday that the world is in “a life-or-death struggle” for survival as “climate chaos gallops ahead” and accused the world’s 20 wealthiest countries of failing to do enough to stop the planet from overheating.

The UN chief said emissions of global-warming greenhouse gases are at an all-time high and rising, and it’s time for “a quantum level compromise” between rich developed countries that emitted most of the heat-trapping gases and emerging economies that often feel its worst effects.

Guterres spoke as government representatives opened a meeting in Congo’s capital Kinshasa to prepare for the major U.N.-led climate conference in the Egyptian resort of Sharm el-Sheikh in November. It’s a time of immense climate impacts around the world _ from floods that put one-third of Pakistan under water and Europe’s hottest summer in 500 years to hurricanes and typhoons that have hammered the Philippines, Cuba and the U.S. state of Florida.

In the last few weeks, Guterres has amped up a push for climate’s version of asking polluters pay for what they’ve done, usually called “loss and damage,” and he said Monday that people need action now.

Under water: Is the real estate industry waking up to ‘climate risk’?

“Failure to act on loss and damage will lead to more loss of trust and more climate damage. This is a moral imperative that cannot be ignored.”

Guterres said the COP27 meeting in Egypt “must be the place for action on loss and damage.”

In unusually critical language, he said commitments by the so-called G20 group of the world’s 20 leading economies “are coming far too little, and far too late.”

Guterres warned that current pledges and policies “are shutting the door on our chances to limit global temperature rise to 2 degrees Celsius, let alone meet the 1.5 degree goal.”

“We are in a life-or-death struggle for our own safety today and our survival tomorrow,” he said.

“COP27 is the place for all countries — led by the G20 — to show they are in this fight, and in it together,”Guterres said. “And the best way to shot it is by showing up at COP27 in Sharm el-Sheikh.”

Loss and damage has been talked about for years, but richer nations have often balked at negotiating details about paying for past climate disasters, like Pakistan’s flooding this summer.

The issue is fundamental for the world’s developing countries and Guterres is reminding rich nations “that they cannot try and brush it under the carpet … G20 nations have to take responsibility for the great need their actions have caused,” said Mohamed Adow of Power Shift Africa, which tries to mobilize climate action in Africa.

Princeton University climate science and international affairs professor Michael Oppenheimer said in an email that if high-income and other big emitters like China want the U.N. convention on climate change to remain useful, “they will need to grapple seriously with loss and damage.”

Otherwise, he said, negotiations “are headed for interminable gridlock.”

Poor countries with low emissions can simply refuse to discuss anything else until the issue is resolved, Oppenheimer said. Richer countries may find a way around the issue without paying for direct damage by paying poorer nations more to adapt to lessen future disasters, but even then developed nations will have to pay out money, not just make promises as they have in the past, he said.

Guterres’ remarks “highlight what small islands and least developed countries have been arguing for decades _ that loss and damage is irrefutable and already disproportionately affecting the most vulnerable countries and communities,” said Adelle Thomas, a climate scientist from the Bahamas.

“We are reaching a breaking point, where developed countries must respond instead of continuing to delay action with empty promises and prolonged discussions,” she added.