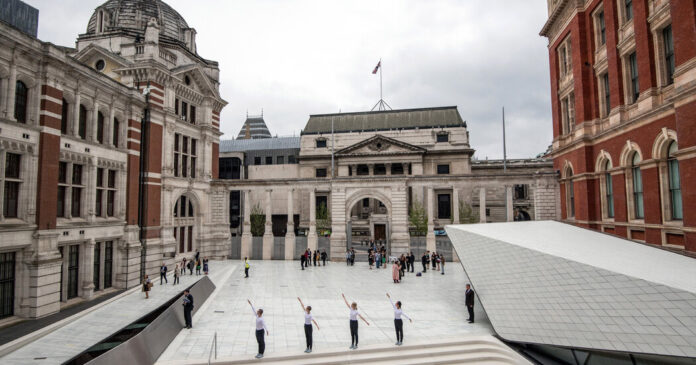 LONDON — The director of the Victoria and Albert Museum in London once told the BBC that the museum was “proud to have been supported by the Sacklers” — the family whose philanthropy is tied to the drug at the heart of the opioid crisis. The museum was “not going to be taking” its name off the walls, the director, Tristram Hunt, added at a 2019 news conference.

Yet now, the museum has done just that: removing signage that pointed visitors to its Sackler Courtyard, the glittering multimillion-dollar main entrance that opened to much fanfare in 2017, as well as to its Sackler Center for Arts Education.

The museum, which has one of the world’s leading design and decorative arts collections, said in a statement that it had “mutually agreed” with the Sackler family that the name would be removed. “We have no current plans to rename the spaces,” the statement added.

The changes, which were previously reported by The Observer, a British newspaper, will take some time to be complete, a museum spokeswoman said. The name still appears on the museum’s website.

There has been growing criticism of museums with links to the Sackler family because of its connection to OxyContin, the addictive painkiller often blamed for exacerbating the opioid crisis in the United States. Members of the family founded Purdue Pharma, the drug’s manufacturer, and have been involved in years of lawsuits related to the crisis.

Fentanyl Overdoses: What to Know

Understand fentanyl’s effects. Fentanyl is a potent and fast-acting drug, two qualities that also make it highly addictive. A small quantity goes a long way, so it’s easy to suffer an overdose. With fentanyl, there is only a short window of time to intervene and save a person’s life during an overdose.

Stick to licensed pharmacies. Prescription drugs sold online or by unlicensed dealers marketed as OxyContin, Vicodin and Xanax are often laced with fentanyl. Only take pills that were prescribed by your doctor and came from a licensed pharmacy.

Talk to your loved ones. The best way to prevent fentanyl use is to educate your loved ones, including teens, about it. Explain what fentanyl is and that it can be found in pills bought online or from friends. Aim to establish an ongoing dialogue in short spurts rather than one long, formal conversation.

Learn how to spot an overdose. When someone overdoses from fentanyl, breathing slows and their skin often turns a bluish hue. If you think someone is overdosing, call 911 right away. If you’re concerned that a loved one could be exposed to fentanyl, you may want to buy naloxone, a medicine that can rapidly reverse an opioid overdose and is often available at local pharmacies without prescription.

In March 2019, Britain’s National Portrait Gallery turned down a $1.3 million donation from a charitable arm of the Sackler family, prompting other cultural institutions in Europe and the United States to announce they would not be accepting further donations. That July, the Louvre in Paris became the first major museum to strike the Sackler name from its walls, when it covered over references to the Sackler Wing with gray tape.

In the past year, the Metropolitan Museum of Art and the Solomon R. Guggenheim Museum in New York have also removed the Sackler name.

But the V&A, as it is known in Britain, long resisted calls to eliminate the Sackler name. Theresa Sackler, the widow of Mortimer D. Sackler, a co-owner of Purdue Pharma who died in 2010, was a trustee of the museum until her term expired in October 2019. She was also a director of the museum’s foundation from November 2012 until October 2021.

From powerful pharmaceuticals to illegally made synthetics, opioids are fueling a deadly drug crisis in America.

The museum’s public statements about the Sackler name did not waver until the Guggenheim severed its ties to the family this year. At the time, the V&A issued a statement saying that the Sackler family’s charitable arms had announced their intention to “work constructively with any institution that wishes to reassess its naming obligations to our family.” The museum’s trustees would “reflect on” that statement, it added.

On Monday, the spokeswoman for the V&A declined to answer questions about what caused the change of heart over signage. A spokesman for the Sackler family referred questions to the museum.

Goldin said she was “very surprised” but also “very pleased” by the decision because the Victoria and Albert Museum had been “the last bastion of the Sacklers.” She said her campaign group P.A.I.N. (short for Prescription Addiction Intervention Now) had “done what we set out to, which was expose the Sacklers and also start the conversation in general about money and museums.”

Of the six museums the group has protested, five have removed the Sackler name. Only the Arthur M. Sackler Museum at Harvard University has not done so; Arthur Sackler died in 1987, before the invention of OxyContin, and his family sold his stake in the pharmaceutical business after his death.

‘It went so quick. You tried to do one thing and...