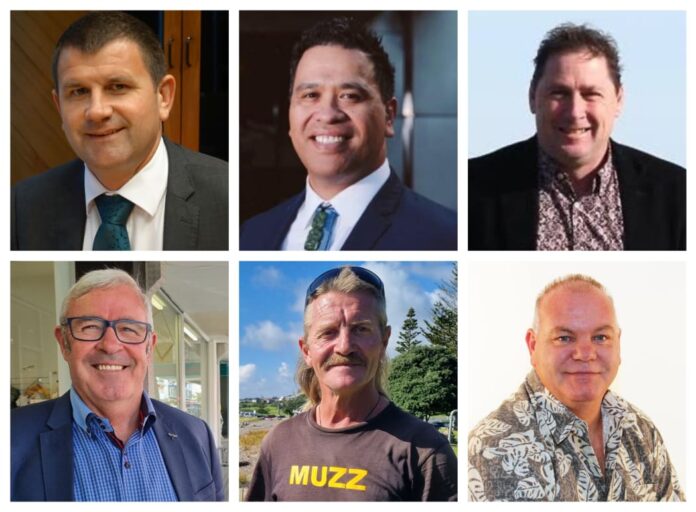 A crowd showed up for the debate between mayoral candidates in New Plymouth today.
Photo: RNZ / Robin Martin

There was an exclusion, a late withdrawal, a passionate defence of the mullet hairstyle and even a bit of policy chewed over at a packed-out mayoral debate in New Plymouth on Friday.

First order of the day was for MC Matt Rilkoff – the editor of event organisers the Taranaki Daily News – to explain the no-shows.

“Unfortunately yesterday I made the decision to rescind the invitation to candidate Shaun Clare following a threatening social media post he made to one of our photojournalists,” he said.

Clare was upset about a photo published of him with a awkward facial expression at a previous candidates’ event.

Rilkoff had apologised and removed the photo from the paper’s website, but said such threats could not be tolerated.

The absences didn’t end there. Local businessman Peter Hardgrave was a late withdrawal from the debate.

“He dropped out last night and he’s alleged threatening behaviour from fellow council candidates, so we’ll be investigating that today,” Rilkoff said.

That left six mayoral aspirants including three sitting councillors and the incumbent, Neil Holdom, who is seeking a third term.

Each candidate had 90 seconds to make their pitch for the mayoral chains before tailored questions were asked of each of them.

Businessman Greg Mackay had a copy of that weighty document which he attempted to rip in half – a stunt he has pulled at least twice before on the campaign trail.

Dinnie Moeahu – a current councillor who is attempting to become New Plymouth’s first Māori mayor – cited his community work which had seen him earn a NPDC Citizens Award and Taranaki Person of the Year Award.

Holdom talked about what he wanted to achieve in the next three years and reiterated his position on Three Waters.

“You’ll notice a major focus on infrastructure and my view is let’s keep it local. I oppose the Three Waters reform.

“I believe Taranaki can do it better and we need less centralisation out of Wellington, not more.”

The questions directed at individual councillors cut to the bone.

McDowell – aka Muzz the Mullet Man – was asked why voters should take him seriously when his campaign had largely been based around a hairstyle.

To applause the former truck driver and motorcycle enthusiast retorted:

“Because I’m a man of my word … it’s actually a fashion and I’ve had this thing for 35 years coming up and it’s like … it’s quite simple, it’s my identity, but you’ve got to look at the person within, their heart, if they speak from their heart.

“The thing is, I’ve been doing my homework … the thing is that every vote counts and I’m not saying vote for me, what I’m doing is giving you all an option.”

Mackay was asked where he had been since the last local body elections, when he also stood for mayor, which provoked a candid reply.

“I’ve thought about it over the past three years how to come back… I’ve had problems, I broke my back a couple of years ago and still don’t have a lot of strength and a lot of … a few marital problems to sort out and children to sort out, but I’m back.”

Chong has garnered headlines over his embarrassment about the te reo Māori version of the national anthem, for flying the Confederate flag, his role in the illegal occupation of Parliament grounds and even a public stoush over a parking ticket issued by his own council.

He was asked if he could represent the whole community when as a councillor he had frequently alienated sections of it.

“I’d like to say the media is half this problem. All those accusations had a huge twist in the media and many people believed it.

“I’ve only got 90 seconds to explain myself, but if want to come up to me I’ll tell you the real story. I’m actually peed off at how the media twist these things.”

Holdom didn’t get off the hook either.

The heat was put on him over planned $248 million water infrastructure upgrades, a $40m commitment to a new sports hub and a further $30m for the Coastal Walkway extension to Waitara.

These came with a 12 percent rate increase this year and 7 percent for the subsequent years of the long-term plan.

Holdom was asked if his dream of creating a “lifestyle capital” in New Plymouth only applied to the wealthy.

“I think the investments we are proposing are actually about storing value for future generations.

“The fact that we have to catch up on infrastructure reflects that as an organisation we haven’t delivered in the past.

“Too many councils have kicked things down the road because increasing rates is politically unpopular. I’m incredibly proud of the team that you chose and the way we’ve worked together to say we are going to do what’s right, not what’s popular.”

The mayoral aspirants were also asked about what they saw as the major challenges facing the district and what their vision for the district was before taking questions from the public.

Attendees wanted to hear about how the candidates would handle climate change, work with iwi and deal with the state of the district’s footpaths.

Voting papers have been delivered and the local body elections close on 8 October.