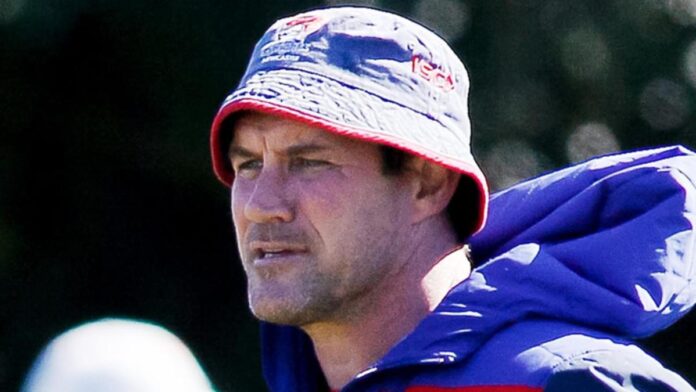 England forward Joe Batchelor says the St Helens players will be motivated by a desire to send Australian-bound coach Kristian Woolf out on a high in the 25th Super League grand final against Leeds.

Woolf, who built on the success of his predecessor Justin Holbrook, will bring the curtain down on his three-year stay in Super League after the Old Trafford showdown.

He will join NRL expansion club the Dolphins as an assistant under master coach Wayne Bennett in 2023.

And Batchelor is hoping he can leave with his 100 per cent grand final record intact as Saints seek an unprecedented fourth consecutive triumph.

“We want to reward Woolfy with one final trophy and one final performance that befits what he’s all about,” Batchelor said.

“In the three years he’s been here, I think we’ve delivered performances that he represents and hopefully we can do it one more time for him.”

Saints are favourites despite the absence of prop Alex Walmsley but Batchelor says they will not underestimate the Rhinos, who finished the regular season with seven wins from their last eight matches under new coach Rohan Smith.

The Rhinos snatched fifth spot before putting out Catalans Dragons and Wigan on their way to a record 14th grand final appearance.

Among those standing in the way of a historic fourth straight grand final win is former St Helens second-rower James Bentley, from whom Batchelor inherited the number 12 shirt at the start of the year.

“He’s someone we know well,” Batchelor said. “His performances at the back end of the season have been phenomenal.

“We know exactly what he’s about and what he’s going to try and do. We need to make sure we do a job on him and the other 12 players that are out there for Leeds.”

A second successive grand final win would cap a breakthrough year for the 27-year-old Batchelor, whose outstanding form for his club earned him a run-out for England against the Combined Nations All Stars in June and who looks to be an automatic pick for the World Cup.

“At the start of the year I just wanted to make sure I was playing week in, week out for St Helens,” he said.

“Hopefully we can lift the trophy and then there’s a chance I can play in a home World Cup for England. That would be one of the proudest days of my life.”