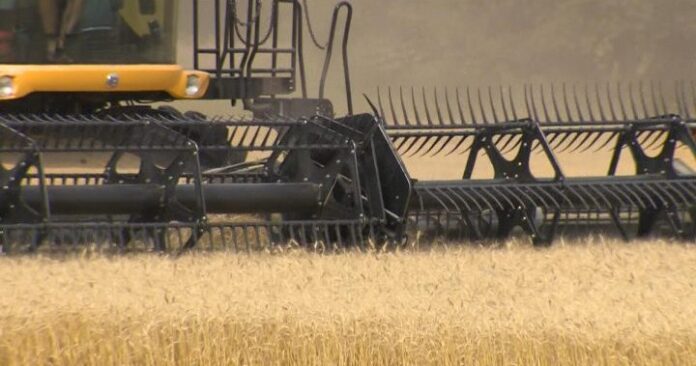 Harvest for many producers has been slowed over the last week, as cool and damp weather was felt across Saskatchewan

Even with the cool weather, harvest progress for the province is at 73 per cent, up from 64 per cent from last week, and ahead of the five-year average of 68 per cent.

For Canadian shoppers, inflation on groceries is up 10.8% compared to last year

“Certainly a lot of progress for sure, but not as much of a jump as maybe some people would have expected,” crops extensions specialist for the ministry of agriculture Matthew Struthers said.

“So going forward, we would like to see that cool, damp weather just hold off just a little bit longer, and then we can get all the crop off and then let it rain. And eventually one day let it snow, but not yet,” he said with a laugh.

An additional 18 per cent of the crop is ready to be swathed or straight-cut.

“The majority of crop damage this week was due to wind, waterfowl, wildlife and lack of moisture,” the province said in this week’s crop report.

“There were several reports of hard frosts across the province, but producers say damage is low due to crops being so well advanced. The recent rain will likely cause some minor downgrading to standing or swathed cereal crops due to bleaching.”

While moisture slowed down harvest for many producers, for those already done, it was a welcome sight.

Concerns about field and equipment fires have eased and there is hope that the rain will be enough in some areas to allow pastures a little regrowth. The Pelly area received 44 mm, the Melfort and Moosomin areas 30 mm, the Lipton area 13 mm, the Rosetown area nine mm and the Vanguard area four mm.

The province said these conditions have declined across the province due to strong winds and a lack of rain.

Pasture conditions are rated as four per cent excellent, 23 per cent good, 31 per cent fair, 25 per cent poor and 17 per cent very poor. Conditions vary across the province, with the southeast, east-central and northeast regions in good to excellent condition due to rainfall in the spring and throughout the summer that helped maintain pasture grass.