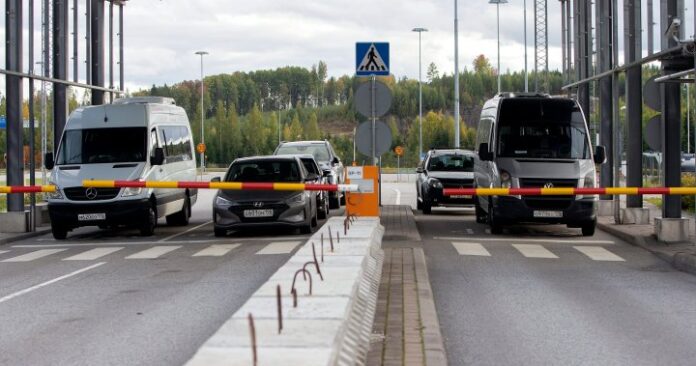 Traffic into Finland across its southeastern border with Russia was heavy on Friday, border guards told Reuters, adding that the number of Russians who entered the previous day was more than double the amount who arrived the week before.

Finland is considering barring most Russians from entering as the volume of arrivals from its eastern neighbour “intensified” on Thursday following President Vladimir Putin’s order for a partial military mobilisation.

“This morning it remains busy … maybe increasing a little bit from yesterday,” a spokesperson for the border guard said early on Friday.

Max, a 21-year-old Russian student who declined to give his last name, said he was going to Finland to catch a flight to Germany to visit relatives.

“Technically, I’m a student so I should not be afraid of being drafted but we have seen that things are changing very quickly so I assume there is a chance,” he told Reuters upon crossing the border at Vaalimaa.

5:46
‘We could be at a turning point’: Freeland comments on Putin’s nuclear threats

‘We could be at a turning point’: Freeland comments on Putin’s nuclear threats

About 7,000 people entered from Russia on Thursday, some 6,000 of them Russian, meaning a 107 per cent increase compared with the same day a week earlier, according to the border guards.

Three people had sought asylum on Thursday. None had the week before, it said.

Finnish land border crossings have remained among the few entry points into Europe for Russians after a string of countries shut both physical frontiers and their air space to Russian planes in response to Russia’s invasion of Ukraine.

At Vaalimaa, the busiest crossing point, cars lined up for up to 400 metres on Friday, a longer queue than the day before, a border official said.

Those arriving by car or bus left their vehicles to have their paperwork checked before continuing on with their journeys. Border guards searched some vehicles.

Lines were also “longer than normal” at the second-biggest Nuijamaa crossing.

Finland opted to keep its frontier with Russia open following Russia’s Feb. 24 invasion of Ukraine although it has cut back the number of consular appointments available to Russian travellers seeking visas.

Prime Minister Sanna Marin said on Thursday the government was assessing risks posed by people travelling through Finland and was considering ways to sharply reduce transit from Russia.

Sinn Fein, once linked to IRA, poised for ‘seismic’ victory in...