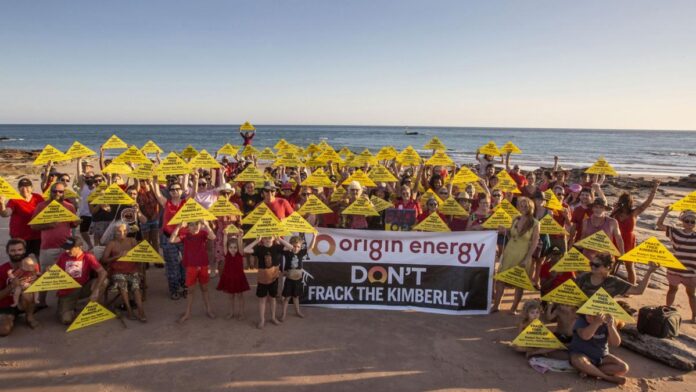 Another major energy company has withdrawn its investment in natural gas projects in the Kimberley with an environmental group claiming it as a victory for their cause.

Environmental groups’ celebration over Origin Energy’s withdrawal from the Rafael 1 gas project may be short-lived, with venture partners Buru Energy saying they now have the “clarity required to move the project forward”.

On September 19, Origin Energy announced it would divest from both the Beetaloo gas project in the Northern Territory and their 50 per cent stake in a joint venture with Buru Energy in the Kimberley’s Canning Basin — the Rafael 1 gas project.

Broome-based anti fracking group Environs Kimberley celebrated the decision with director Martin Pritchard claiming it as a major win to keep oil and gas industrialisation out of the region.

“Without Origin’s financial backing, Buru Energy’s plans to produce polluting gas from its Rafael conventional gas discovery is now also up in the air,” he said.

But the celebration may be premature as Buru Energy executive chair Eric Streitberg said the company would now look for a new partner to help rapidly advance its gas projects.

“While it is very disappointing that Origin’s actions have caused a significant delay in Canning Basin field operations, Origin’s now expressed intentions provide the clarity required for us to move the project forward,” he said.

“While Origin’s process is under way, we will continue to prepare for both future field operations and the commercialisation program for the Rafael discovery.

“(It) is a very exciting period for the company with the possible introduction of a new and aligned joint venture partner in the Canning Basin and real progress being made in Buru’s energy transition subsidiaries.”

Buru has already found a new partner for its Beetaloo gas project in Tamboran Resources, who bought Origin Energy’s stake in the project for $60m on September 19, pending government approval.

Origin’s exit from the Kimberley is expected to delay field operations for Buru Energy until the 2023 Northern Australia operating season.

It comes after Midnight Oil frontman Peter Garrett shed his shirt at Stompem Ground to reveal a “Frack Free Kimberley” t-shirt before calling out Deputy Premier Roger Cook and other politicians in the crowd to prevent the practise happening in WA.