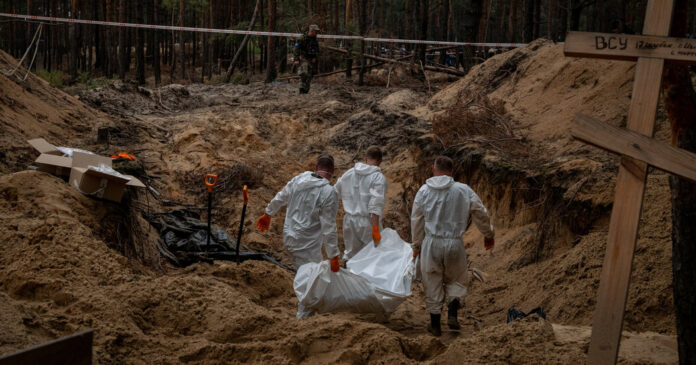 KYIV, Ukraine — The body pulled from a pit in Izium was in a bad state of decomposition, the skin peeling from the bone and drained of color. But one thing stood out: the blue and yellow bracelet around the dead man’s wrist.

The colors of the Ukrainian national flag had barely faded.

The corpse, one of hundreds exhumed after Ukraine reclaimed Izium from the Russians this month, was another reminder of the savage toll of the war. But the bracelet conveyed something different: the fortitude and individuality amid a grim tableau of mass death. And it seemed to send an almost defiant message: Ukraine lives on, even if some of its people do not.

The image quickly captured the imagination of the nation.

It was shared widely on Facebook and the telegram messaging app. Dmytro Kuleba, Ukraine’s foreign minister, had a similar bracelet on his wrist when he spoke at the United Nations Security Council on Thursday as evidence of Russian atrocities.

“I do wear one too,’’ he said, referring to the bracelet. “And Russia should know one thing,” Mr. Kuleba said. “It will never be able to kill all of us.”

When Oksana Sova saw the image she noticed something else. The bracelet looked like the one her children had given to her husband, Serhiy, in 2014 when he first went off to fight for Ukraine. She looked at the full image of the corpse, studied the tattoos, and knew in a moment it was him.

“Serhiy’s most recent tattoo is a samurai with a branch of sakura above him,” she said in a telephone interview on Thursday as she went to collect his remains. “Samurai is a warrior who goes till the end. And sakura is a symbol of hope and recovery.”

Her husband, she said, had the spirit of a samurai.

On Friday, Ms. Sova buried her husband, this time with a proper funeral in their hometown Nikopol in southern Ukraine.

Serhiy’s is one of 338 bodies recovered from the mass grave in Izium as of Friday, according to the Kharkiv prosecutor’s office. They include 320 civilians and 18 soldiers like Serhiy. Ukrainian troops reclaimed the city two weeks ago, the most striking success in their offensive across the northeast that routed Russian forces.

Oleksander Filchakov, the chief prosecutor in the Kharkiv region, said on Thursday there are 445 graves in the cemetery where Serhiy was exhumed. In some pits, he said people were buried four at a time. A large number pulled from the ground have mine and blast injuries.

“There are also signs of torture,” he said.

He said he expected the exhumations at this one site to be completed on Friday but investigators would then move on to other burial sites they have located in the city.

For months, Ms. Sova thought she would be one of the many Ukrainians left to wondering what had happened to a loved one, suspecting her husband was dead but never sure.

The last time she spoke to him, she said, was on the morning of April 19.

Serhiy, 36, had described to her how Russian planes were bombing their position outside of Izium. Russian artillery was pounding them from all directions and Russian tanks were closing in. He said they were outgunned and six of his fellow soldiers were “two hundred,” military jargon for killed.

They were ordered to stand their ground and he told her he would follow the command. Then the line went dead.

About a week later, she asked the military command for information and gave them a DNA sample. She was told his body was not found at his unit’s last known position and he was officially declared missing.

Every day for five months, she said, she would search through images from morgues. She held out hope that perhaps he was taken prisoner; after all, others had been captured and survived, she reasoned. Why not Serhiy?

The pair married 15 years ago and she still calls him her soul mate. He was trained as a cynologist — a breeder and trainer of dogs — and they made a small business out of their love of canines.

In 2014, after Russia fomented a war in eastern Ukraine, he was mobilized to fight against Russian-backed separatists and joined the 93rd separate mechanized brigade, known as “Kholodny Yar.”

Marat had just entered first grade and his daughter was only one. As he headed off to the front, they gave him the bracelet with the colors of the national flag, his wife said.

He never took it off. He was wearing it when he fought in battles in Pisky and outside the Donetsk airport. After a year he was demobilized and went back to civilian life. But he still wore the bracelet.

On the eve of the Russian invasion, like so many other former soldiers, Serhiy re-enlisted and began training to become a combat medic. But when the war came, he was rushed to the front to protect the border region in the northeastern province of Kharkiv.

“You know, he’s always been so persistent,” his father, Oleksandr Sova, 60, said in an interview. “Many times I tried to talk him out of military service,” but to no avail. “So I had to accept his choice.”

He last spoke to his son in April, when Serhiy asked him to look after the house, his wife and his children.

“I would do it anyway, but why would he ask?” he said. “I had such a heavy foreboding. And afterwards the connection was lost.”

Mykhaylo Onufrienko, a fellow soldier who had known Serhiy since 2003, joined the family in their search after he went missing. They would often comb through Russian social media scrutinizing images of captured or killed Ukrainian soldiers.

“I saw photos of his passport and IDs of his comrades,” Mr. Onufrienko said, “I think he was taken prisoner,” he said. “In another photo I could recognize him with his hands tied and a bag on his head. They definitely interrogated and tortured him, I’m sure he never said what they wanted to hear. So they killed him.”

Serhiy’s wife also believes he was captured and tortured.

The forensic report said that Serhiy died as result of a gunshot wound, but the pathologist could not offer a time of death. So the family doesn’t know for sure whether he died on the battlefield or was taken prisoner and then killed.

But he was found.

His former colleagues, military comrades and residents stood by his graveside on Friday afternoon. Despite severe shelling overnight and early in the morning near Nikopol, many people came to see Serhiy laid to rest, his wife said.

“It was hard for all of us, but we all stood firm, as Serhiy did throughout his life,” she said.

The bracelet, however, was not buried with him. It remained in Izium, evidence in the criminal investigation into his death.

Russian officer reveals why he risked it all to quit Putin’s...

What’s Occurring in Belarus? Right here Are the Fundamentals.